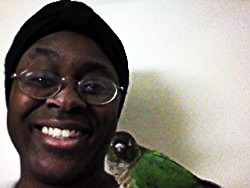 Tonya Liburd is one of our members of the SFPA. She shares a birthday with Simeon Daniel and Ray Bradbury, which may tell you a little something about her; and while she has an enviable collection of vintage dust bunnies to her credit, her passions are music (someday!) and of course, words. One day she hopes, when introducing herself as a writer, she won't feel all weird about it.

Based in Canada with Caribbean roots, she is the Associate Editor of Abyss and Apex Magazine. Her fiction has been longlisted in the 2015 Carter V. Cooper(Vanderbilt)/Exile Short Fiction Competition. I recently had a chance to interview her over at SPECPO, the blog for the Science Fiction Poetry Association, and have been happy reading her work, which was recently nominated for a Rhysling Award

She has short stories in the anthology Postscripts to Darkness 6, and forthcoming from Expanded Horizons and Polar Borealis; her creative nonfiction can be found in The Malahat Review, and in the Mosaics: Independent Women Anthology. 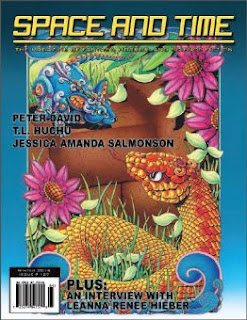 Her poetry has appeared in Space and Time Magazine and The Cascadia Subduction Zone. Her Twitter-microfiction has been published by @7x20 Magazine, who also featured her microfiction for the week of March 28th, 2016. She has forthcoming microfiction from Grievous Angel (Urban Fantasist). She blogs at https://thespiderlilly.wordpress.com/