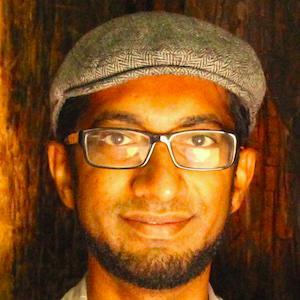 Naru Sundar is a member of the SFPA and writes speculative fiction of all kinds. He has previously been a DJ, a composer, and a potter. When he isn’t devouring books or writing, he enjoys music and art and deep moments in the redwoods of northern California.

You can visit him online at: http://www.shardofstar.info/ He's relatively new to speculative poetry, with one of his first published poems appearing in 2015, "Origami Crane / Light-Defying Spaceship," which appeared in Liminality in their September issue, and I found it a very engaging debut. I'm excited to see where he goes with his poetry in the years ahead! In 2017, he already has a poem "Jackfruit" scheduled to appear in Strange Horizons. I expect it won't be long before he has even more pieces to share.