A big congratulations goes to the organizers of the Pasadena Comic Con over the recent weekend. Convened at the Pasadena Convention Center on Green Street, it remains Pasadena's only comic convention in a city that is home to some great bookstores and comic shops such as Vroman's, Comic Factory, Collector's Paradise and the Retro Store.

For a one-day comic convention they had a good attendance and energy throughout the day with a good variety of dealers, cosplayers, creators and other special guests and panels to keep the proceedings interesting. 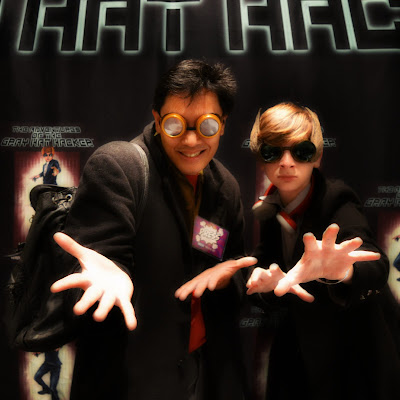 Among the interesting creators I met was young Liam Dow, who was the creator of the comic series The Adventures of the Gray Hat Hacker. "The Gray Hat Hacker protects the dark web from black hat hackers trying to take over the internet."  Dow is one of Hollywood’s busiest actors. He recently appeared in the special role of Bobbie, an autistic boy in Days of Our Lives and in the DreamWorks new media production of OMG! Just Jacques. In addition to acting, Liam also performs stand-up comedy and has premiered at clubs such as the Improv in Hollywood, the Ice House in Pasadena and Flappers in Burbank. His motto is "laughter is awesome." He was very well-spoken and enthusiastic, and I certainly wish him success in the years ahead.

Easily the most impressive costume this weekend was MasterJedi1975's Wheeljack costume from the first generation of Transformers, complete with lights. It's ambitious and entertaining and sure to thrill people both young and old. 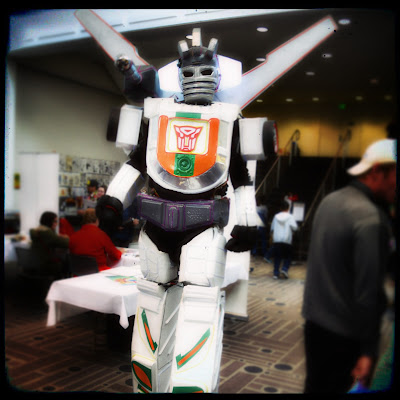 Singer, songwriter and actress Rei Kennex has been presenting an impressive Rey cosplay around the Southern California convention scene. This weekend, she went with a darker ensemble that almost verges on requiring a "Spoiler Alert!" warning, considering that I think this exactly the direction Rey is likely to go in Episode 8 later this year.

With roots in the Ukraine, she’s a self-proclaimed sci-fi and fantasy “geek” whose passions run the gamut from authors Michail Bulgakov (“Master And Marguerite”), Neil Gaiman (Stardust), Stieg Larsson (The Girl with the Dragon Tattoo), and Ann Aguirre (Grimspace) to movies like Star Wars and various classics. I found her music to be very interesting, described at some points as "epic pop," which frequently focuses on deeper issues.than one normally finds in pop music from her contemporaries. 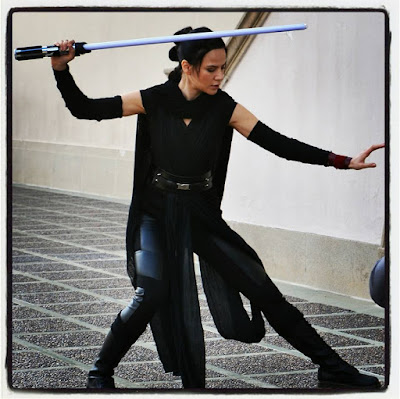 Cosplayers of all ages came to Pasadena Comic Con, including this fellow who did a spot-on Stinky Pete from Toy Story 2. A shoutout also goes to Cassandra Liu, aka Mediocre Wall of China, who was celebrating her birthday that weekend and who rocked a wonderful Jubilee from the X-Men, although I didn't get a great picture of her at the time. 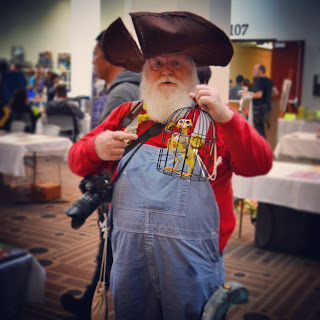 From the steampunk side of things, artist Chelsea Rind was a stunning showstopper and one of the highlights for anyone who saw her that weekend. Working as a graphic designer, she's very talented whether doodling or creating works of fine art, and it will be interesting to see how her career flourishes in the future. 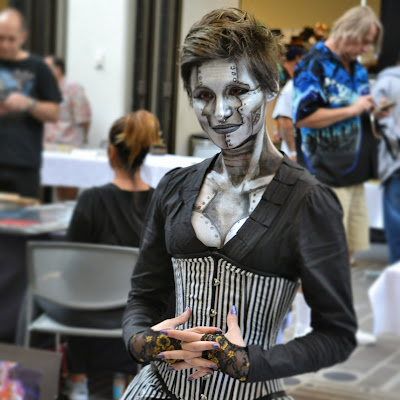 Parked outside of the Pasadena Convention Center was good old Roxanne, or Zombie Patrol ZP-22. As I hunt for a new set of wheels, I have to admit, she got the hamster wheels spinning. I look forward to seeing her one day in her planned feature film. 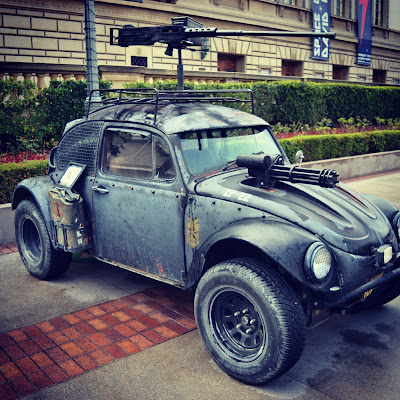 There were many wonderful special guests attending Pasadena Comic Con, including John Kricfalusi the creator of Ren & Stimpy, and Tim Bradstreet, whose art was so much a part of my college years to the present from Vampire: The Masquerade to The Punisher, G.I. Joe, The Shadow, and Unknown Soldier. Ernie Reyes, Jr. was also there, as was Gigi Edgely, and Philip Friedman, who played the witch in the first Insidious horror movie.

Aron Eisenberg, who played Nog on Deep Space Nine was also a very friendly guest who was playing Illuminati when I ran into him, which was particularly cool. I hope to see more of him at event in the future. 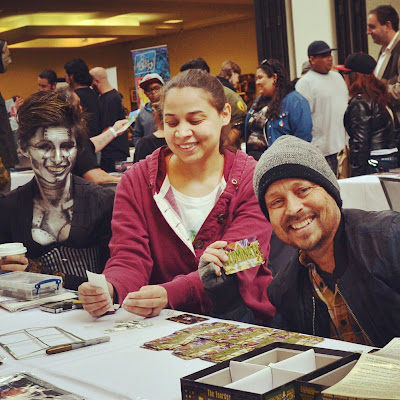 I also had a chance to meet Herbert Jefferson, Jr. who played a key role in creating a presence for communities of color on television, especially science fiction as Boomer from the original Battlestar Galactica series. Back in the day, he graduated with honors from New York's American Academy of Dramatic Arts in 1969.

These days he's involved in many community and charity activities including the U.S. Marine Corps Reserve Toys For Tots Program, The Wounded Warrior Project, IAVA Supporter, The USO, California Paralyzed Veterans Association, The American Red Cross and the California Special Olympics. As we continue conversations on inclusion at conventions and other gatherings, I found it inspiring that he's take such an interest in accessibility for fans and community members. 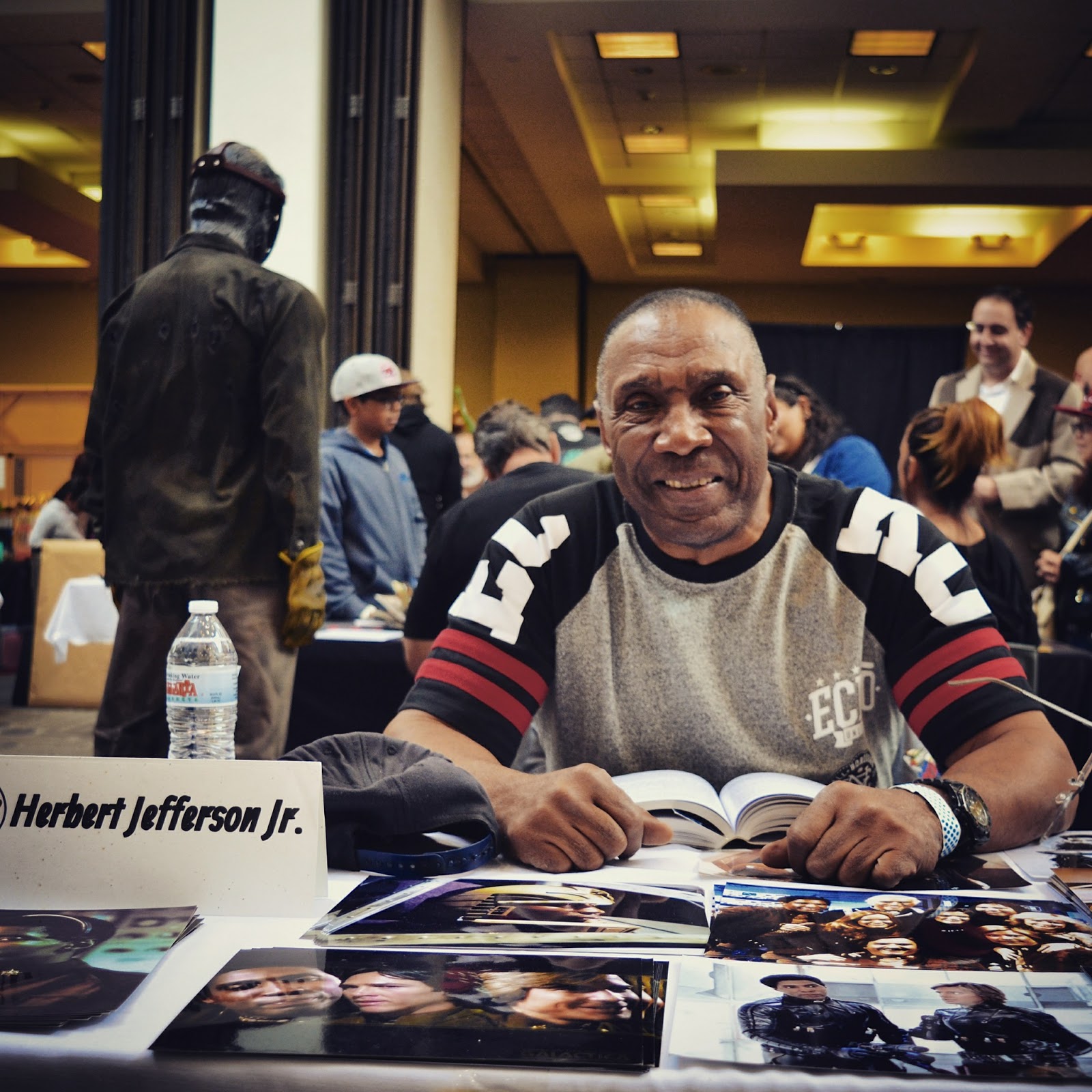 As with any convention, there's always much more to report, but I'm definitely looking forward to seeing who they bring next year. If you're in the Pasadena area when it comes around again, I'd definitely stop by to see what's happening. 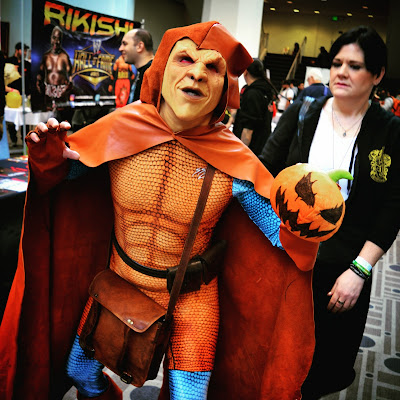