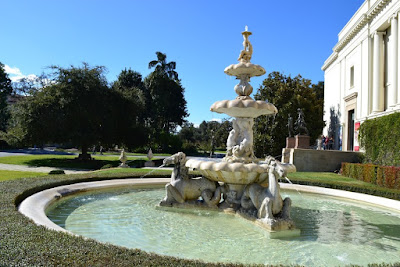 This week we take a look at the storied Huntington Library, Art Collections and Botanical Gardens, a collections-based educational and research institution established in 1919 by Henry E. Huntington in Pasadena, California.

Beyond books, the Huntington is home to an amazing and extensive art collection including permanent and rotating displays that make it well worth a visit if you're in the area. 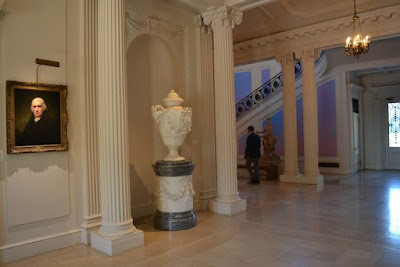 The primary focus of the art collections are 18th and 19th-century European art and 17th to mid-20th-century American art. The gardens are also magnificent to behold and include landscaped gardens, including a Japanese Garden, a Chinese Garden and a Desert Garden. To its credit, I think it's difficult to take it all in in a single day, and it warrants repeat visits to get the most out of it. This season, among the special exhibits worth catching are Lari Pittman: Mood Books, Real American Places, Becoming America, and the Orbit Pavilion. 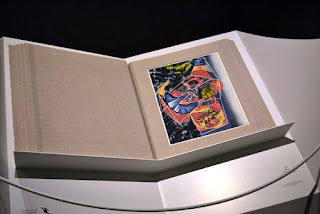 Closing on February 20th, Los-Angeles based artist Lari Pittman is known for his exuberant, colorful, and graphically complex works. Huntington visitors can see the artist at his hallucinogenic best in this exhibition.

Six monumental illustrated books, each opening to more than four feet in width, contain 65 paintings by the artist. They draw from a variety of aesthetic traditions, ranging from decorative art and design to advertising and folk art. Combined with Pittman’s brilliant draftsmanship and acidic color, the images advance an astute and acerbic social commentary embedded in narratives rich with real and invented mythologies.

As someone who's worked closely with the Minnesota Center for Book Arts, I have an appreciation for books that challenge our sense of what a book might be beyond those intended for the mass market, and this was a provocative exhibition. It closes February 20th. 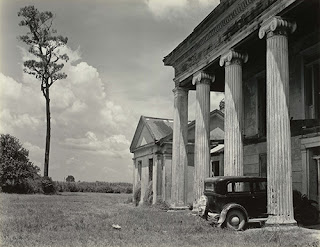 The poet in me appreciates the dialogue between the poet Walt Whitman and photographer Edward Weston in Real American Places, on display until March 20th.

In 1941, the Limited Editions Book Club approached Weston to collaborate on a deluxe edition of Whitman’s poetry collection, Leaves of Grass. The publisher’s ambitious plan was to capture “the real American faces and the real American places” that defined Whitman’s epic work. Weston eagerly accepted the assignment and set out with his wife, Charis Wilson, on a cross-country trip that yielded a group of images that mark the culmination of an extraordinarily creative period in his career. On the other hand, the book didn't sell that well and the resulting prints became mostly a footnote barely mentioned in Weston's storied career.

Weston's approach appears not to have been a literal interpretation of Leaves of Grass opting to take a broader inspiration of the concept, and though he typically kept extensive notes on what he was taking pictures of, it's difficult to find many references to what seems like it should have been an extraordinary journey. At this point in my life, this resonates with me at many levels as both a photographer and as a poet.

Up until October, 2019, The Fielding Wing's inaugural exhibition, Becoming America showcases more than 200 works from the Fieldings’ collection of 18th- and early 19th-century American art works, including paintings, sculpture, furniture, ceramics, metal, needlework, and other related decorative arts. Meanwhile, the Orbit Pavilion will be up until September this year, and as a speculative poet, I strongly encourage you to visit. The outdoor installation is the brainchild of Dan Goods and David Delgado, visual strategists at NASA’s Jet Propulsion Laboratory, who conceived an innovative “soundscape” representing the movement of the International Space Station and 19 Earth satellites. 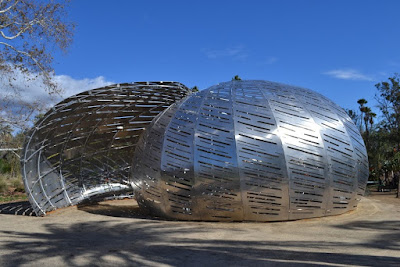 In their permanent collection, I'd definitely also encourage you to take a look at their Gutenberg Bible, a copy of the Canterbury Tales, and their display on Paradise Lost.

Their notes on Paradise Lost brought into focus for me that it was written in the aftermath of the English Civil War and resulted in many of the words we continue to use in English today such as "pandemonium," "terrific," "debauchery," and "stunning," and as a work that might well be considered speculative poetry, it makes me wonder what words Lao who've survived our civil war might invent and add to the Lao language and others. 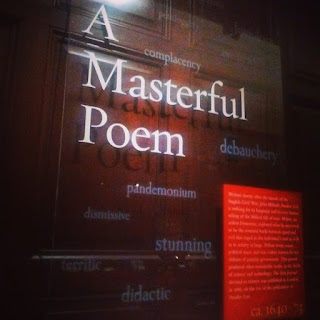 If you want to visit, the hours are typically from 10-5, but it's always closed on Tuesdays. The last ticketed entry time is 4 p.m. The library and art galleries close at 4:30 p.m. and guests are encouraged to begin exiting at this time. The Huntington is closed on Thanksgiving, Christmas Eve, Christmas Day, and Independence Day. Admission is between $23-25 for adults and students can enter for $19-21 depending on whether it's a weekday or weekend visit.