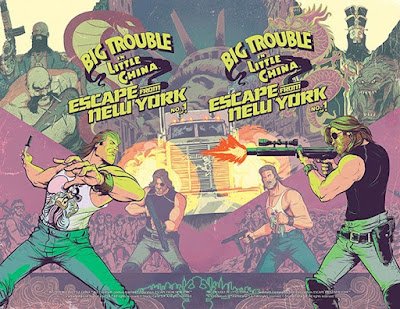 Well if you loved the characters of Jack Burton and Snake Plissken, both played by Kurt Russell in the classic John Carpenter films Big Trouble in Little China and Escape from New York, you're going to see what might happen if they both appeared in the same off-kilter dystopia.

In theory, this could be awesome or horrible, with the initial preview art already suggesting a return or involvement of Lo Pan and the Duke of New York, among other bad guys. There's a way to make it work, I think, but let's see what they really try. It's planned as a six-issue mini-series.