Chinese Super-Man, the Great Ten and the concept of the superhero team

Recently, DC Comics brought acclaimed Asian American writer Gene Luen Yang on board to write Superman, and one of the reasons why is that in the wake of a recent development in the DC universe, Superman's powers have been dispersed, and one of the new people to receive those powers is Kenan Kong, a young Chinese man. 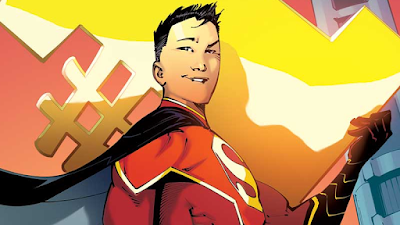 I met Gene a few years back at the Loft Literary Center in Minneapolis, and have always been very impressed by his work on books such as American Born Chinese, Boxers and Saints, and The Shadow Hero, which updates and revives an appreciation for The Green Turtle, who may well be the first Asian American superhero.

One thing that interests me about the timing is that this is also the tenth anniversary since DC introduced the Great Ten, a group of Chinese superheroes for the DC universe during the beginning of the New 52 era.

The membership of the Great Ten included heroes named in a traditional manner such as Accomplished Perfect Physician, August General in Iron, Celestial Archer, Ghost Fox Killer, Immortal Man-in-Darkness, Mother of Champions, Seven Deadly Brothers, Shaolin Robot, Socialist Red Guardsman, and Thundermind. They received their own one-shots in late 2009-2010, but have since largely fallen off the map in most of the DC titles. I've always found them to be a bit of a problematic group, and I'm not certain I'd want to see them brought back in any prominent way because there was an awful lot that relied on perceived stereotypes and tropes of what Chinese characters are supposed to be like, and what the Chinese mindset is likely to be regarding superheroes native to their country.

As I watch the developments, I'm brought to mind recent discussions that have been found online that suggest Chinese folk traditions may have given us the first superhero team as we know it. While one might think that belongs to the ancient Geek myths, it's hard to argue that there were enough heroes and demigods in any one given story to call it a super team. In Jason and the Argonauts, for example, Hercules basically jumps ship before he's useful for much of anything. The most common versions of the story give each brother a distinctive skill or talent that's handy in at least one of the predicaments they face. One's capable of hearing from far away, another can fly, another is immensely wise and has a head as hard as iron. One is strong, another can tunnel beneath the ground, while another can stretch, and so on. But they can only succeed against their biggest antagonist by all of them working together. That definitely sounds familiar.

I think it definitely bears looking into, but our question must also be: Where can all of this go next, really? What new innovations to these stories are possible, and what will resonate most with the next generation?