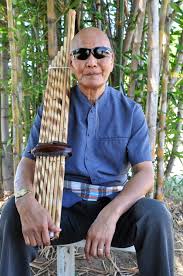 Congratulations to Bounxeung Synanonh of Fresno, who recently received a National Heritage Fellowship award from the US government's National Endowment for the Arts.

He is now one of only five Lao in the world to hold this distinction, in addition to master weaver Bounxou Chanthraphone (2000), needleworkers Mone and Vanxay Saenphimmachak (1993) and singer Khamvong Insixiengmai (1991) in the 34 year history of the awards.

It is one of the highest recognitions an artist can receive from the United States government.They are presented to artists who embody artistic excellence in order to support their continuing contributions to the traditional arts heritage of the United States.

Born in 1949 in Savannakhet, he lost his sight at 15 but learned to play the khaen that same year from elders who took the time to teach him. At 67 years old, he's still teaching students and performing.