Kyle "Guante" Myhre is releasing a new album, an acoustic hip hop EP that's a collaboration between him and singer/songwriter Claire Taubenhaus. It's called A LOUD HEART. It's political, it's pretty, it's folky, it's hip hop. Definitely something different-- they're both pretty proud of it. Here are the release party details: 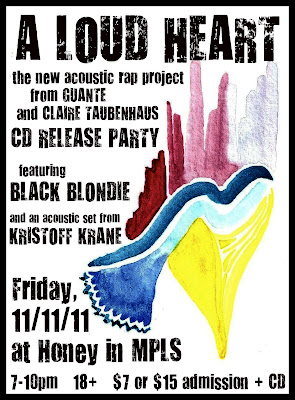 Guante performed for the release party of my second book of speculative poetry, BARROW back in October, 2009, and many other projects in and around the Twin Cities. He brings great, positve energy and talent to the Minnesota literary scene. Definitely catch him if you can. http://www.guante.info/2011/10/loud-heart-release-party-news.html

Thanks! Means a lot.