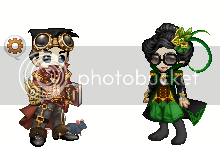 In 2012, the following conventions may be of interest for people interested in learning more about Steampunk. The following list focuses on conventions near major Lao, Hmong and Southeast Asian communities in the U.S.

Anachrocon in Georgia typically happens around the last weekend of February. http://www.anachrocon.com

The Alternative Living Expo in Philadelphia takes place around the first weekend of March. No website at the moment.

Wild Wild West Con in Arizona also happens around the first weekend in March: http://wildwildwestcon.com I might head out to this one if my schedule allows it.

Nova Albion in Santa Clara, CA usually takes place on the last weekend of March, but was canceled for 2012. http://steampunkexhibition.com/ Alas, this was one of the more interesting ones in 2011 with its Wild Wild East theme which had significant programming considering Asian approaches to Steampunk.

Gaslight Gathering in San Diego is May 11-13th, 2012. http://www.gaslightgathering.org and I'll most likely be making a showing here.

Nakamacon in Madison, Wisconsin. The last weekend of May. Their website is down at the moment: http://www.nakamacon.com

The World Steam Expo in Deerborn, MI is usually the last weekend of May. http://www.worldsteamexpo.com

TeslaCon in Madison, WI is around the week before Thanksgiving. http://www.teslacon.com

If you know of any other events or activities that might be of interest, drop me a line!

Actually, Nova Albion was a fucking mess, with WESTERN approaches to ASIAN themes in steampunk. I'm still pissed off about it.

Yeah, reading through the con reports it's troubling. Not wholly unexpected, but troubling. Trying to figure out a constructive way to develop a con that really embraces an Asian approach to Asian themes in Steampunk in America.