Shangri-La, Laos and the Ravens 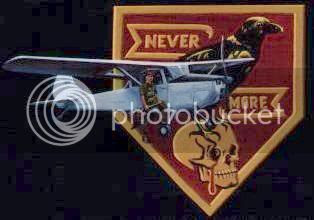 In Chapter 3, "The Secret City" of Christopher Robbins' classic The Ravens, there's a footnote that "Almost all of the Ravens stationed at Long Tieng interviewed by the author compared the base to Shangri-La. An invention of James Hilton in his 1933 novel, Lost Horizon, the paradise was conceived as an ageless retreat of peace and prayer. However, the name has been used before by Americans with warlike intentions. Franklin D. Roosevelt called his mountain refuge in Maryland Shangri-La, and the "base" from which the U.S. planes flew in the Tokyo air raid in 1942-an aircraft carrier-was also codenamed Shangri-La."

This week, a British diplomat's memoir arrived for me, entitled War In Shangri-La: A Memoir of Civil War in Laos by Mervyn Brown. I'll be reviewing it later this season. Thus far, it's an interesting read from a non-American, non-Laotian perspective.

You'll consistently find comparisons to Shangri-La in many books regarding Laos as a whole, and sometimes specifically the CIA airbase at Long Tieng, enough so that you can actually play Lao Memoir Bingo with the term.

You can find a free copy of Lost Horizon over at the Australian branch of Project Gutenberg to see what the original was all about that inspired the term being connected so often to Laos. There have been several film adaptations of Lost Horizon, although I find Frank Capra's Lost Horizon more watchable than the 1973 version.