A visit to Poets House in New York City 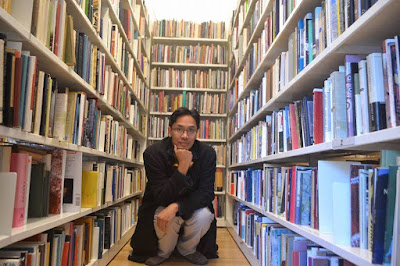 I just returned from a successful gathering during the CTRL+ALT: A Culture Lab of Imagined Futures convened by the Smithsonian Asian Pacific American Center in New York this past weekend. Well over 10,000 people came to attend throughout and I had many opportunities to speak with established and emerging artists and community builders on speculative poetry.

It was particularly gratifying to see the eyes of my younger students light up at the possibility that they could not only be consumers of speculative literature and media, but also creators was powerful and reaffirmed for me the importance of our work together. So please, keep sharing, keep creating, keep challenging our expectations of what speculative poetry can be.

I'll be reporting more on this throughout the rest of the month, because when you have 40+ artists, there are a lot of ideas to engage worth some longer discussions. I'm going to be very excited sharing them with you. 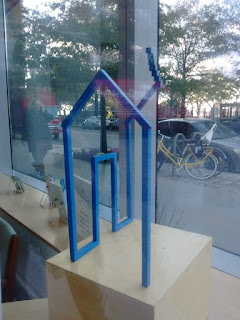 Additionally, in my capacity as the president of the Science Fiction Poetry Association, I traveled to the famed Poets House in New York which houses over 70,000 volumes of poetry. A number of my fellow Science Fiction Poetry Association members have a few books archived here, including SFPA Grandmaster Bruce Boston, and myself, and the collection Time Frames, which includes the work of Robert Frazier, Ruth Berman, Roger Dutcher, Mark Rich, Ann K. Schwader, Geoffrey A. Landis, John Grey, Camilla Decarnin, Steve Sneyd, Alan Stewart and John C. Rezmerski. If you visit you can find Time Frames and several others filed in the "Science & Technology" section. 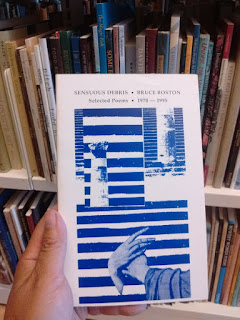 It was clear that there were many other authors whose books are needed here, if we wanted Poets House to have a more representative selection of the work we've done over the last 40+ years as speculative poets. I do thank the Poets House for a very New York welcome upon arriving.

I only had about an hour to scan through the collections before I had to get to the Smithsonian, but hadn't spotted any Rhyslings or Dwarf Stars at the moment. Ideally, we'll get their holdings caught up to the at least 2010, if not earlier. It would be nice to get the Poets House a good run of Star*Line, as well, but because the physical issues for earlier decades are harder to track down, we might only be able to supply them from the more recent years. I've been in good conversation with previous SFPA president Deborah Kolodji to consider what we might all do to collaborate with Poets House in the future, as well as to support other archives across the country.

I appreciated the exhibits they had on display at the moment. Some of the items on display really challenged us to reconsider what we might well describe as a poem, such as as this piece: 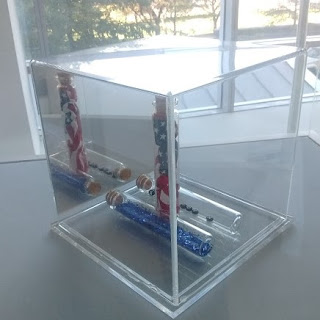 I found it was intriguing in itself, but I felt became more interesting once the viewer lets themselves see themselves within it. 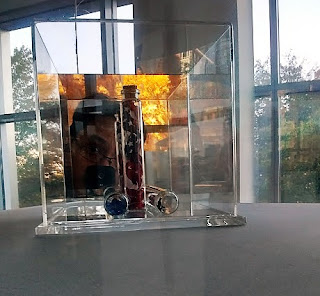 It was interesting to examine the holdings they had for the Asian American poetry section, and I was happy to see that they had the work of Cambodian poet U Sam Oeur, as well as two books by my good colleague Souvankham Thammavongsa. I did not spot a copy of the books by Burlee Vang or Khaty Xiong this time around, but someone may have already had those checked out. 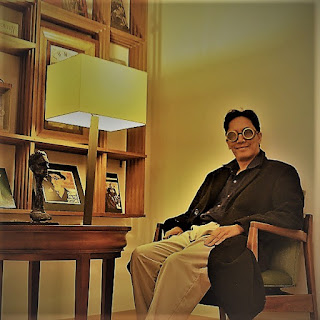 Poets House was founded in 1985 by the poet Stanley Kunitz and  Elizabeth (Betty) Kray, It was intended to be a home for all who read and write poetry. It was inspired by The Poetry Library at the Southbank Centre in London and began in a New York City public high school. The first books of the library came from the collection of Paul Zweig. As they considered the name for the library, Stanley Kunitz said, “Let’s call it Poets House. ‘House’ is so much bigger than any institution.” Eventually they grew to be sizable enough that they could moved to a space in Soho from 1990 to 2008 in a loft at 72 Spring Street.

I first visited Poets House in 2003, while attending the book launch for Jessica Hagedorn's anthology, Charlie Chan Is Dead 2: At Home in the World. It was a chance visit, but one of my favorites from that time. It was shortly after I had first reunited with my long-lost family from Laos after 30 years, so the occasion was easy to remember, and I had donated a copy of my chapbook, The Tuk-Tuk Diaries: Our Dinner with Clusterbombs. I was only able to visit for about fifteen minutes due to the hectic schedule we had, but it left an impression, and I was able to take a quick self-portrait: 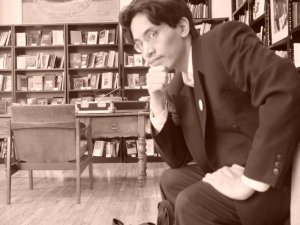 As I consider the journey I've taken since, it is a delight to see how far Poets House, too, has come in those 13 years. Hopefully it won't be too long before I have a chance to visit again. Poets House is now located at 10 River Terrace (at Murray Street) and is located near very picturesque parks. It's well worth the trip, but bear in mind their hours are Tuesday to Saturday, opening at 11:00 am and closing by 7:00 pm, and 6:00 pm on Saturdays. 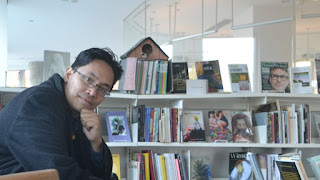