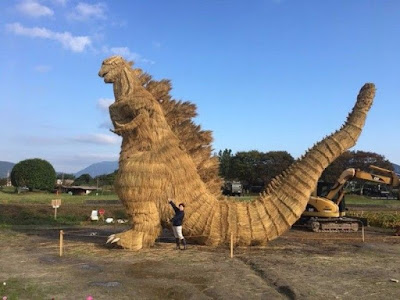 A giant straw Godzilla has shown up in Japan, just in time for his 62nd birthday! It took four months to complete and over 150 volunteers. He stands 7 meters tall and has a tail of at least 10 meters, complete with LEDs in his eyes, dorsal fins and tail. He probably should hold off using his radioactive breath due to flammability concerns.

This is part of the annual Straw Art Festival in Japan which has been held since 2008.