The Tuk-Tuk Diaries: Preludes and Postcards 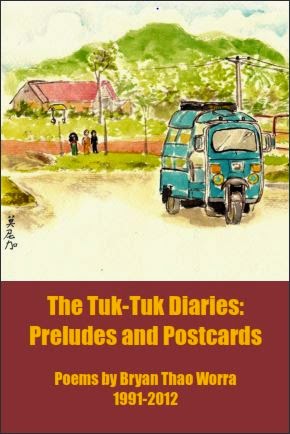 Starting the year off right, here's a new retrospective collection of mine I released yesterday: The Tuk-Tuk Diaries: Preludes and Postcards (1991-2012). It collects the poems from at least three of my out-of-print books, seven chapbooks and other various projects that weren't widely available when first published. In total, this collection spans approximately 217 pages of verse. None of the poems in DEMONSTRA are included.

There are a few exclusions, but they're works that won't be missed by the ages. A good deal of my 1990s juvenalia isn't included. A few poems from defunct online journals are also missing. I have notes that I submitted to them, but some were based from Myspace or similarly fleeting sites. Let the lesson be: Keep redundant copies of your poems around, even if it seems excessive.

I wouldn't consider this an official "new" book of mine because it's missing a number of elements, such as annotations and acknowledgements. Further, 99% of the material has appeared previously, it's just arranged a little more differently than usual.

For me, artistically, however, it was important to metaphorically kick these verses out into the world so that I can now concentrate on creating a new body of work, particularly a number of projects calling for my attention including my Laodyssey: Laomerica 40 and the Laopocalypse texts. And, of course, getting the definitive Deluxe edition of DEMONSTRA finished once and for all to all of my kickstarter backers from 2013. Oof. Best laid plans of mice and men is an understatement.

But to keep this short: Happy New Year, and keep inspired!