Only Make Believe: Pageant of the Masters

This year I had a chance to see my first Pageant of the Masters at Laguna Beach in the Irvine Bowl, and the theme was one I can thoroughly connect with, "Only Make Believe," to celebrate the power of imagination.

The Pageant of the Masters has been a tradition since the 1930s. This year, nearly 500 volunteers worked together as cast members, backstage assistants, make-up artists and refreshment servers. Collectively, they dedicated over 60,000 hours of their time to recreate living versions of classic artistic masterpieces from around the world.

I think art works best when new art or conversation emerges from the encounter. You can internalize it, never sharing your reactions and never exploring a piece further, certainly, but I don't think we move as far forward for it as when we exchange responses.

This year's pageant presented over 19 pieces.

Only one was from Asia, Utagawa Kinyoshi's colorful Mitsukuni Defying the Skeleton Spectre. But the artists ranged from Charles Buchel, Antoine-Louis Barye,and Sandow Birk to Amazing Stories cover artist Frank R. Paul. One of Salvador Dali's pieces closed out the enjoyable evening.

They don't allow photography for any number of good reasons at the Pageant, so I'll be posting the originals that inspired them.

For today's post, we'll look at the opening pieces: The classic 'Boy Who Wouldn't Grew Up.' And a pretty good peanut butter.

Most of us are more familiar with the Disney version but these images are from the beginning of the 20th century and reflect the aesthetics and values of British society rather than the American take. And I think that's important to note. 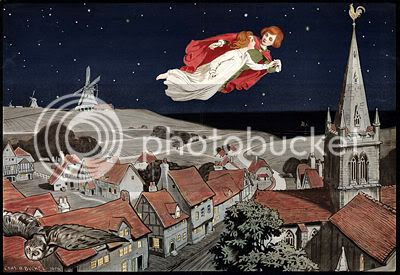 We owe a lot to Peter Pan being in our lives because of Buchel.

Buchel is the first artist known to have visually depicted the character of Peter Pan. Today we use a very different visual vocabulary to show Peter Pan, although Wendy tends to remain about the same. Buchel's lithograph was for a theatrical production in 1904 at the Duke of York's theater.

Interestingly, Peter Pan had appeared in J.M. Barrie's book, The Little White Bird, but it wasn't until this play that he became a breakout character who would go on to appear in his own novel, movies and everything else you see him in today.

Here, Buchel's depiction suggests a quiet, charming city and a dreamy, serene setting with only a distant hint of industry as seen in the windmills. The tallest building is a church steeple. How different from the images of Disney!  To modern sensibilities, he looks a little too calm and serene for a 'Boy who wouldn't grow up' and not at all a defiant, vibrant rascal as we might expect and prefer.

Still, we can only imagine what must have been alluring to British audiences who wanted to see the magic of Peter Pan's story on stage from this poster.

A little later, we have Frampton's Peter Pan, this time without Wendy, who in Buchel's work, isn't nearly as freaked out as one might expect for flying over the city. Compare it to Lois Lane's first flight with Superman. 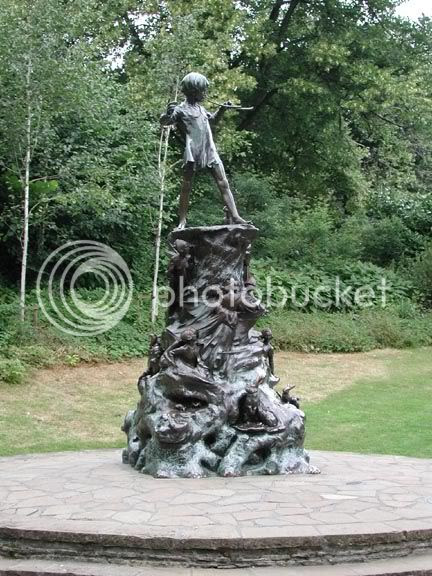 Here, we have a Peter Pan that's far more defiant and rebellious as he's playing a set of pipes. You can see fairies, rabbits and squirrels all around the base of this bronze.

One way I'd read it is as a monument to even youth triumphing, standing over both the natural world and the fantastic. He's not wholly alone- the pose suggests he confidently has companions to summon and entertain, even dressed in little more than a rag. It's an interesting message for Frampton to extract from Barrie's story.

Barrie himself commissioned this sculpture in 1912, and was Barrie's ideal version of Peter Pan, now residing in Kensington Park.  It first appeared in the park on May 1st, as if by magic.  Because Frampton used a different model than Barrie had wanted, Barrie was concerned the sculpture didn't show enough of the Devil in Peter Pan.

Initially, there were those who wondered if authors should be allowed to promote their work by erecting statues in public parks, especially in secret as Barrie had done. That's pretty hard to imagine today.

Seven copies of Frampton's Peter Pan have since been made and installed around the world, including New Jersey. I suppose I could insert a Jersey Shore joke here about people who won't grow up, but that's a bit obvious.

The noted fantasy artist Brom had an interesting take in his dark 2009 novel, The Child Thief which asks what we should think of a young boy-man who runs around kidnapping companions.

In Brom's notes on his book, he cites a line from the original Peter Pan: “The boys on the island vary, of course, in numbers, according as they get killed and so on; and when they seem to be growing up, which is against the rules, Peter thins them out; but at this time there were six of them, counting the twins as two.”

What did it mean to 'Thin them out'? Brom asked "How many children had Peter stolen, how many had died, how many had been thinned out? Peter himself said, “To die will be an awfully big adventure.” 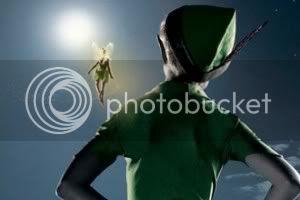 From that standpoint, I certainly consider the opening of the Pageant of the Masters with images of Peter Pan to be a bold statement indeed, although I'm fairly certain they weren't taking Brom's interpretation into account at the time.

In the meantime, here's the original text of Peter Pan and Wendy online at Project Gutenberg.