Pageant of the Masters: Mitsukuni Defying the Skeleton Spectre 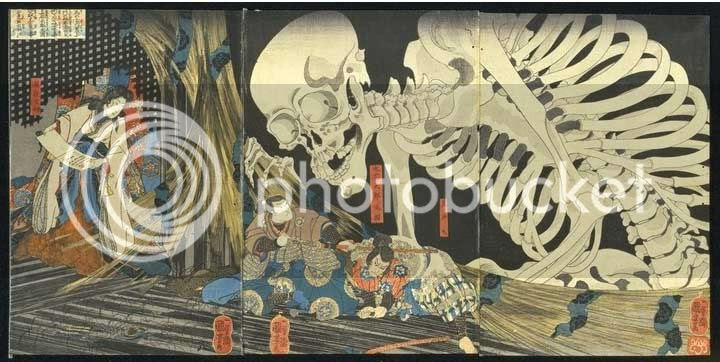 In this woodblock print, the 10th century witch Takiyasha summons a skeletal specter in the hope of frightening the hero Mitsukuni.

Mitsukuni had come searching for the surviving conspirators of an attempt to establish an Eastern Court in competition with that of the Emperor in Kyoto. Takiyasha was the daughter of the warlord leading this failed effort. After the death of her father, Takiyasha continued living in the ruins of their palace at Soma planning revenge.

In this image she is summoning a specter from the void, but Mitsukuni is not frightened, although the other man is. In one variation of the tale, it is a rival warrior in a duel with Mitsukuni and we are watching Takiyasha's plan backfire as her warrior is frightened instead.

This piece works for a number of reasons, sparking the imagination whether you're familiar with the legend or not. While it is effective in telling the story, Kuniyoshi achieves something remarkable here beneath the surface view.

Part of the effect comes from the narrative that emerges and shifts depending on whether you begin looking at the image from left to right or the other way, from right to left.

Do you read it as: Here is Takiyasha, initiating the action, with Mitsukuni at the center with the frightened companion for contrast, and at the end, the reminder of death looming over all of them?

Or do you see it first as: Here's the specter of death, looming over the frightened man, then Mitsukuni, then revealing it was Takiyasha who orchestrated all of it?  This is an interesting change in the narrative thrust.

Utagawa Kuniyoshi was one of the last masters of the woodblock print style of ukiyo-e. He was born January 1st, 1798 and lived until April 14, 1861.  Kuniyoshi was  a versatile artist who'd been influenced by examples of European art and architecture he'd encountered. This was reflected throughout his images of beautiful women and mythic creatures, animals (particularly cats) and landscapes.

When one considers that he is believed to have based the skeleton specter of this piece on Western anatomical drawings he'd encountered, it's possible there's another subtler story being presented. But that would require a much larger post.

Kuniyoshi often used dramatic tryptichs to great effect. He also was a master of caricature. From a collector's point of view, many of his original prints are surprisingly affordable considering what you might expect compared to the prices an original Hiroshige or Hokusai.

As we look at Mituskuni Defying the Skeleton Specter, why does he choose THIS particular moment? When we appreciate an artist's work we should ask why this specific moment and not another. And what greater message to a society is a master like Kuniyoshi embedding by choosing this moment?

So many possible variations but this is a dramatic point Kuniyoshi thought would most draw audiences in to the story. And he's right.

It's something to consider as we compose and create our own art.