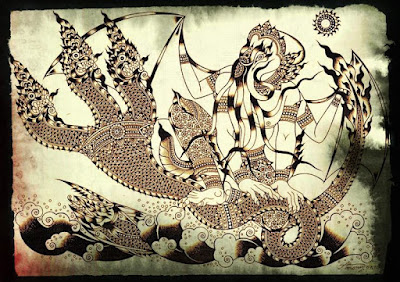 There are many ways one gets introduced to Lovecraft in the modern age, but mine was first through the advocacy of figures such as Sandy Petersen and his Call of Cthulhu role-playing game. I first ran into it in its 3rd edition, and now it's on its 7th edition from Chaoisum. So I see how much time has flown and slithered by. I was also deeply influenced by the Del Rey collections of Lovecraft's work, including the large "Bloodcurdling Tales of Horror and the Macabre" 1987 edition with cover art by the acclaimed Michael Whelan. 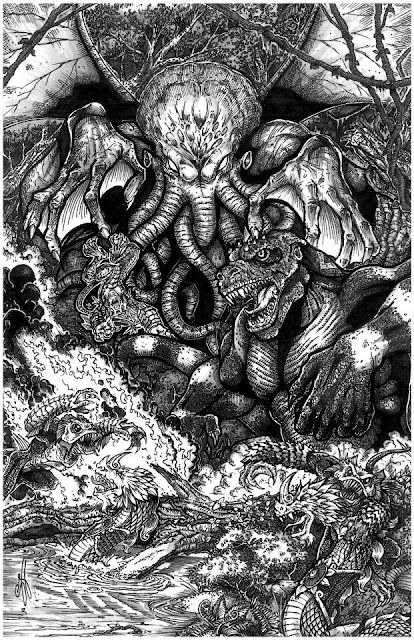 H. P. Lovecraft was born on August 20th, 1890 in Providence, Rhode Island, and lived there most of his life. He began with essays and poetry, shifting towards horror, especially with the rise of the 1920s pulp magazine Weird Tales which published the good bulk of his fiction. His deeply influential output includes 3 short novels and approximately 60 short stories. He passed away in 1937. These days there's a significant debate about the necessity to study him or to continue his legacy in comparison to so many other authors. 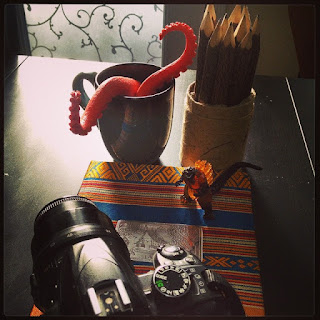 Ultimately, I think you'll like him or hate his work. Some dislike his dense prose in the Asianic style, rather than the more common Attic style that's so popular this century. Others find his views on race, women, and seafood out of fashion, although they still suggest we read Shakespeare, Poe, Hemmingway, Alan Moore, Marion Zimmer Bradley, or any other number of controversial figures. Writers aren't saints, and it's often dangerous when they try to be. You can always find a "reason" not to read another writer.

As I discuss frequently, I feel Lovecraft's work liberated a great many of us, even if we don't hold the same views he has. He presented a way to view science as truly horrifying because even when it was done properly, it didn't necessarily reveal comforting things about the truths of the cosmos.  In the wake of Lovecraft, it wasn't just a Christian Sin vs. Salvation model of conflict, or Good vs. Evil. It was a space where the Cosmos was utterly indifferent to you, and life on Earth began as a galactic joke or accident, and things could change in an instant on you.

I can certainly connect to this.

I've noted that many modern American readers can't quite embrace the idea that humans are powerless when caught in the conflict between entities such as the Great Old Ones and Elder Things. It's a prevailing blindspot that somehow humans could not succeed or become relevant in the grand scheme (or lack of scheme) of things. I think for Lao and others caught in the proxy wars of the Cold War era, however, we can appreciate Lovecraft's vision a little differently. 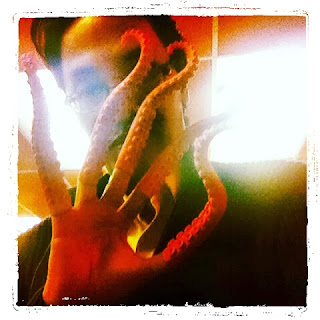 In Lovecraft's writings, we often meet protagonists who are intellectuals and poets. Rarely do we meet the rugged adventurers of the pulp era like Doc Savage in Lovecraft's work. Presenting such protagonists, who, granted, typically go mad by the end, was groundbreaking and refreshing to me.

His worlds were filled with volumes of forbidden knowledge, warped knowledge and cursed knowledge. To read books or to attempt to publish them often brought great misfortune and madness. For a writer such as myself, that carries a unique sort of terror that Lovecraft satisfied ably.

You had stories where the progtonists don't know who they are truly, or what they can become. Or they're given a chance to travel and see worlds beyond imagination, but there's often a terrible price. Again, I think this is something that Lao writers and artists could find fascinating to work with, especially when written against the lens of our traditional Buddhist and animist perspectives. What might truly terrify us, among Lovecraft's many intriguing proposals? 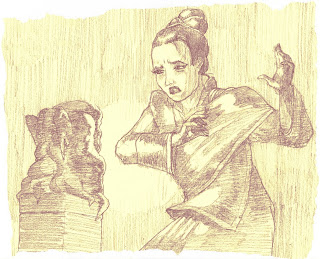 I don't think the final word has really been written on Lovecraft's legacy. I find myself in the position of cautioning others that we have to peel back the current cliches and tropes we connect to his writing and understand that it's not the "tentacles" that are the terror, but the terror beneath that we need to explore.

Kurodahan Press did a great deal to advance this particular premise with their Lairs of the Hidden Gods series, among other collections in the early 2000s, which looked at Lovecraft's influence in Japan. As a Lao American writer, I find myself in a somehwat different position during the Lao American antebellum, but I feel there's much that should interest us in his approach to the world of arts and letters.

In any case, here's to 125 years of H.P. Lovecraft, the light he shone and the shadows he revealed.