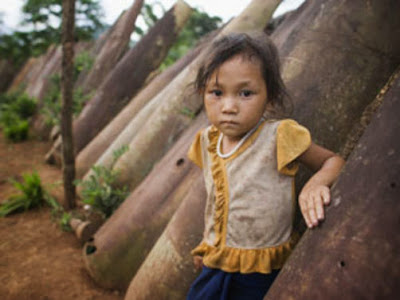 If you're in Seattle next week, you have a chance to hear from Legacies of War as they discuss the 5th anniversary of the UN Convention on Cluster Munitions and 40 years of the Lao diaspora as we try to create a peaceful legacy in the US and abroad. This will be held at ArtXchange Gallery at 512 1st Ave S. in Seattle for one night only! 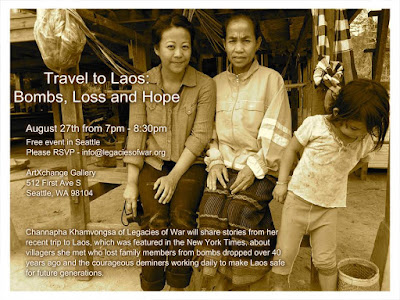 You can read the New York Times article about her life's work here. From 1964 to 1973, the U.S. dropped more than two million tons of ordnance on Laos during 580,000 bombing missions—equal to a planeload of bombs every 8 minutes, 24-hours a day, for 9 years – making Laos one of the most heavily bombed country per capita in history. Author T.D. Allman and photographer Stephen Wilkes recently covered the issue in the National Geographic article "Life After the Bombs." Award-winning Lao American photographer Khampha Bouaphanh also recently traveled to Laos to document this issue and has been sharing some of his work with the community already.

The bombings were part of the U.S. Secret War in Laos to support the Royal Lao Government against the Pathet Lao and to interdict traffic along the Ho Chi Minh Trail. The bombings destroyed many villages and displaced hundreds of thousands of Lao civilians during the nine-year period. Up to a third of the bombs dropped did not explode, leaving Laos contaminated with vast quantities of unexploded ordnance (UXO). Over 20,000 people have been killed or injured by UXO in Laos since the bombing ceased.

As the executive director of Legacies of War, she heads a national organization which seeks to address the problem of unexploded cluster bombs in Laos. A key part of their process is to provide space for healing the wounds of war and to create greater hope for a future of peace.

She has served on the Seattle Women’s Commission and the boards of the Refugee Women’s Alliance and Conference on Asian Pacific American Leadership (CAPAL).

Channapha Khamvongsa has already been confirmed as the keynote speaker for the 2016 Lao American Writers Summit in San Diego, California in May, 27th-26th at the Centro Cultural de la Raza. You won't want to miss this one. Of course, you can also learn more at www.legaciesofwar.org