Ruth-Inge Heinze's Tham Khwan: How to Contain the Essence of Life. 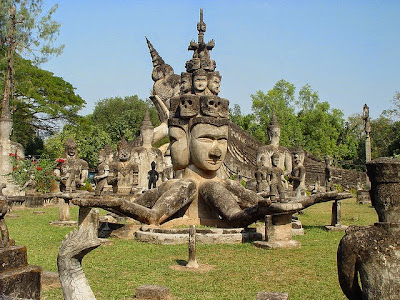 In Ruth-Inge Heinze's now-rare Tham Khwan : How to Contain the Essence of Life. Singapore University Press, (1982) she outlined several of the supernatural entities known to abound in Southeast Asia, particularly Thailand and Laos. The spellings are a little different from some of the ones more commonly used today, but provide a good baseline for consideration.

chao phi – spirit-lord : ghost of noble died in accident as spirit of locality

phi am – "sits on the chest or the liver of sleepers."

phi chamob – "ghost who haunts where a woman died in the jungle."

phi ha -- "spirit of a woman who died in childbirth."

phi krahan – "appears as a man with feathers and tail like a bird." (in the north and the northeast this spirit is called "phi hoan")

phi krasy – "inside a witch and leaves her during sleep by her mouth. This phi has ... long bluish tail. ... Krasy witches have a sleepy appearance during the day. Their eyes don’t blink and they never look anybody in the face. Also, they don’t cast any reflection into a mirror. {This may be true during a dream.} Before krasy witches die, they have to find somebody who inherits the krasy".

phi kuman – "spirit of an infant who died before or shortly after birth." "The infant’s corpse has to be put into a pot which is closed with leaves ... on which charms have been written. The pot in then set afloat" on a river.{cf. Norse (et al.) setting adrift (on a boat) of corpses of the dead; Chinese "burial-writs"; and Hindu placing of bones of cremated corpses into a pot, to be deposited in a sacred river.}

phi pa – "spirit of someone who has died away from home."

phi phrai – spirit of a woman’s corpse from which magical substance hath been extracted by sorcerer : "essences are made which drive men mad and attract women."

phi tai ha – "spirit of a woman who has died of malaria."

phi tai hon – "a headless ghost of one who has died a violent death" {in Borneo, headless ghosts are those of headhunting-victims}

phi thuk khun – "substance of a living person which has be sent out every week so that no harm will come to its owner." {cf. Siberian "external soul"}

chao khao – Lord of the Mountain

chao thi – Lord of the Place

phi ca kla – "spirit in the shape of a jungle cat."

phi khamod – "spirit in the shape of a red star who misleads wanderers."

phi kin hoi – "spirit in the shape of a vampire bat."

phi lan kluan – "spirit through whose body one can see." [transparent]

phi lin lom – "windborn monkey spirit." {according to the Nepalese tradition, the god Vayu (‘Wind’) hath "the form of a monkey with a particularly long nose and large belly." (Tunsuriban, p. 163)}

phi pa – forest-spirit. "Hunters may leave a piece of ... a killed animal, ... to show respect to this spirit."

phi phun tai – "spirit in the shape of a shooting star."

phi poan khan – "spirit in the shape of a black monkey who may suck the big tow of somebody sleeping in the jungle ... near a salt lick."

phra phum – "ancestor spirit or former owner of the land."

phrai nam – "spirit of the water."

thewada cuti – "god who became a mortal rising from the tail of a green snake."