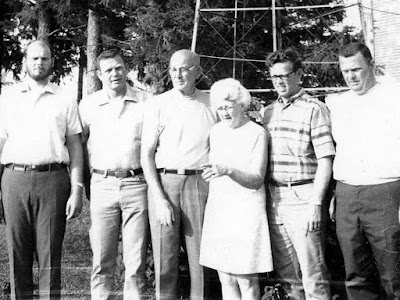 Memorial services were held at 1:30 p.m. Saturday, Aug. 22, 2015, at American Lutheran Church of Rantoul with visitation from 5 to 7 p.m. Friday at Lux Memorial Chapel in Rantoul.

Bill graduated from Bangor High School in 1951 and Western Michigan University (with a Bachelor of Music) in 1955, and earned his Master's degree from the University of Illinois.

After college, Bill began his career teaching music in Lawrence, Mich., grades K-12. He then enlisted in the U.S. Air Force, playing the trumpet in the 505th Band of the Midwest at Chanute Air Force Base in Rantoul. He was honorably discharged from the service and was named band director at Rantoul Township High School in 1961, a position he held for 27 years. He is remembered fondly by hundreds of students who played in the high school band.

Continuing to stay active in music after his retirement, Bill volunteered to play trumpet in the Parkland Community College Band and was quite often honored to be a guest conductor. He was later asked to come out of retirement and be the Parkland College band director.

Professionally, Bill was widely known and recognized as an excellent musician and educator. In 1997, Phi Beta Mu International Band Masters Fraternity presented Bill with the Outstanding Bandmaster Award, and in 2002, he was named to the Band Master's Hall of Fame by the Phi Beta Mu XI Chapter, State of Illinois.

His faith in God and the American Lutheran Church were a large part of his life, including the friends he made through the church. Bill was the choir director at the church for more than 40 years and often accompanied hymns on trumpet. He served on the church council and was president of the congregation.

Bill served the community in many ways. He was a member of the Rantoul Rotary Club for more than 40 years, serving as president (1980-81) and was a Paul Harris Fellow. Bill definitely "tickled the ivory" as the club's piano player, often being the song leader's antagonist, always in good fun. He served as president of the PTA at Broadmeadow Elementary School. He was president of the Community Concert Association that brought a concert series to Rantoul. Bill played trumpet in dance bands his entire adult life. For the past 10 years, he took great joy and pride in being a member of Bud Vandiver's jazz combo, playing weekly at various nursing homes in the area.

Bill had a lifelong love for airplanes, and as an avid modeler, he was recognized by the Champaign County Radio Control Club as an All-Weather Flyer as demonstrated by flying at least once each month for 22 consecutive years. He earned his private pilot's license as well as his instructor, instrument and commercial rating, and logged many hours in the air.

Among his many other interests, Bill enjoyed playing basketball, golf, bicycling, photography and technology. He always had to have the newest gadget on the market and loved sharing them with his brothers.

Bill led a full and meaningful life with many great accomplishments. He has touched myriad lives and leaves a lasting legacy. He was a devoted husband, a loving father and grandfather, a loyal brother and a true friend. He was a man who had a great sense of humor, a pleasant smile and a kind word for everybody, and who placed the needs of others far above his own.