[Map] Savannakhet: "There and back again and again..." 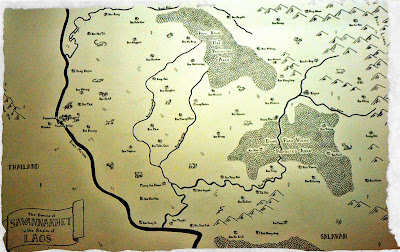 As part of the ongoing Laomagination project, here is a map of modern Savannakhet province if it were done in a hand-drawn fashion similar to the classic maps of fantasy novels. The artist for this one was Stentor Danielson of Mapsburgh. The version above is modified heavily from his original, which is very crisp and clear in its detail.

Perhaps in the future we'll be able to commission the other provinces but in the meantime, I think this provides a wonderful proof of concept for the potential of convening role-playing games here and kindling our collective imaginations.

From a gazetteer point of view:

Savannakhét: The name is derived from Savanh Nakhone, "City of Paradise" or "Land of Fertility." Prehistoric culture is evidenced by stone tools dating between 100,000 and 12,000 years old, with bronze tools from 2000 BCE. The Pha That Sikhottabong stupa is situated on the grounds of a 19th century monastery. At least five fossil sites are in the province, including one dating back 110 million years ago. Reports of Nak signs have increased in recent years.