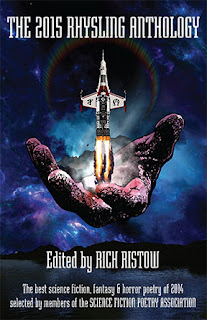 On July 1st, the Science Fiction Poetry Association announced the 2015 winners of the Rhysling Awards in both the short form and long form categories, including a distinctive four-way tie for third place in the short form category. Rich Ristow served as the chair of this year's committee.

A live reading and presentation of the poems was given at the CONvergence convention during the "Giant Lizard Theater: 10 Years Later" reading at the Doubletree at Hilton Hotel in Bloomington, Minnesota at 8:30 PM on July 3rd. Poet Sandra Lindow of Wisconsin read Marge Simon's 1st place poem, "Shutdown" and read Marge Simon's acceptance speech at her behest.

Poets Ruth Berman and F.J. Bergmann were there to accept in person. Active SFPA members, including myself, took turns reading the works of the other winners with an audience of over 20 convention participants throughout the evening. We extend our thanks and appreciation to everyone who participated.

As an officer of the Science Fiction Poetry Association, and a Guest of Honor at this year's CONvergence, I felt it my personal responsibility to read many of the poems of the winners for the occasion. I hope I did them justice, but I can definitely say that all of the winners selected were well-selected. 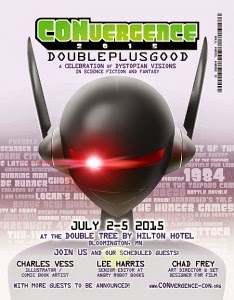 This was a good year for speculative poetry at CONvergence. We had three official events taking place including a poetry writing workshop, the Giant Lizard Theater reading, and a poetry round-robin. Sandy Lindow, and I were in attendance for all of these, and we met several nice emerging poets this year.

The Giant Lizard Theater Reading marks the 10th anniversary since the first reading I'd convened at CONvergence in 2005. It was a wonderful homecoming in a way. At the time it had been organized as a way for poets to share their audacious and imaginative work, loosely organized around the premise of poems about the giant lizards in our lives, whether literal or metaphorical. This could include kaiju, dragons, dinosaurs, komodo dragons, oversized newts, or whatever tickled your fancy.

I read a personal selection of mine from my 2006 chapbook of poems, "The Kaiju and I" that once appeared in G-Fan magazine, as well as some newer pieces from DEMONSTRA. Award-winning poet Eleanor Arnason also shared some of her pieces. With her, Ruth Berman, Sandy Lindow, and F.J. Bergmann, it made for quite an evening.

The winning works are regularly reprinted in the Nebula Awards Anthology from the Science Fiction and Fantasy Writers of America, Inc., and are considered in the SF/F/H/Spec. field to be the equivalent in poetry of the awards given for "prose" work— achievement awards given to poets by the writing peers of their own field of literature.