Christopher Jones and the 2015 CONvergence Guest of Honor Badges 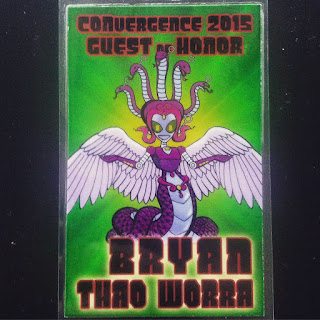 One of the outstanding perks of being a CONvergence Guest of Honor is that you get a wonderful one-of-a-kind Guest of Honor badge illustrated by Christopher Jones, who has been the artist for an amazing number of titles over the years for Marvel and DC comics, among others. He's done work for the Batman '66 series, Worlds of H.P. Lovecraft, Kolchak, Black Scorpion, Re-Animator, Young Justice, and Pirates of the Carribean. He recently posted his guide to the Guest of Honor badges he did for all of us this year and the ideas that went into each badge, including mine.

Here, we have the CONvergence mascot Connie as a classic Nagakanya or Nagini from the Hindu/Buddhist mythology that's common to Laos and Southeast Asia. As I've discussed in many places elsewhere, these are the daughters of the Naga Kings who are often closely connected to wisdom and knowledge at a profound, cosmic level.  In Laos the term would be Nakini or Nakanya. I think Chris did an excellent interpretation with short notice.

He's going to be the Guest of Honor at next year's CONvergence, so that's going to be interesting to see how he does a self-portrait. In the meantime you can also follow him on Twitter at: @ChrisJonesArt