Zig Zag Claybourne and the Brothers Jetstream: An Interview 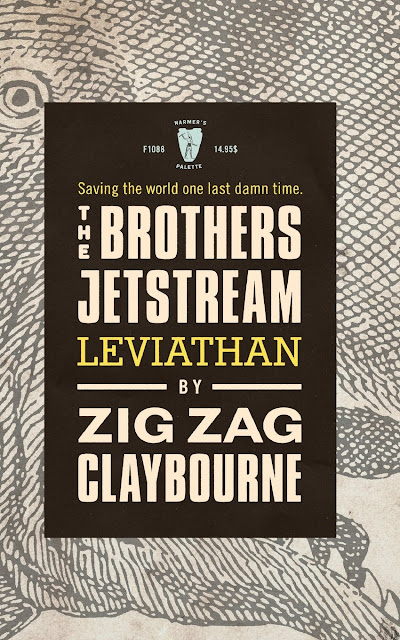 Saving the world one last damn time. When the Brothers Jetstream and their crew seize the chance to rid the world of the False Prophet Buford other evils decide they want a piece of him too. A wild race ensues to not only destroy Satan’s PR man…but make sure no one else gets to him first. Mystic brothers. Secret cabals. Fae folk in Walmart. And the whale that was poured into the oceans when the world was cooled from creation. Adventure doesn't need a new name. It needs a vacation.

Or so the description starts for the sprawling tale that is The Brothers Jetstream: Leviathan that just became available in e-book and paperback form from author Zig Zag Claybourne. Based in Detroit, he has a distinctive voice and style that I've come to appreciate as a writer. I enjoy his sharp humor, pacing and profound sense of adventure. Eminently readable, his other books include Historical Inaccuracies, Neon Lights, and By All Our Violent Guides.  I had a chance to discuss his work with him recently: 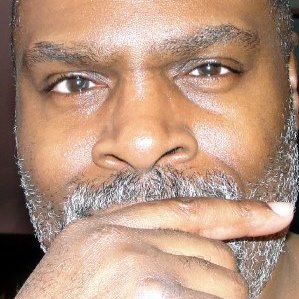 Tell us a little about yourself, and how did you develop an interest in science fiction?

Well, the pen name, Zig Zag Claybourne. It’s not vanity. I googled my real name and the top pick was for a dead guy who wrote “books for boys” in the fifties. I tried variations and initials. Each time, sorry, bub, somebody’s already in line. So I said screw it, I’ll use something no one else possibly has.

When it comes to science fiction, I was the kid who taped Star Trek on audio cassettes (late seventies) to replay at leisure. I was on-demand before on-demand was on-demand! I would sit in front of the TV with my microphone and recorder and record the entire show (minus commercials; I was commercial-skip before commercial-skip was commercial-skip). My influences were Trek, Twilight Zone, Isaac Asimov, Harlan Ellison—I was damn near genetically drawn to things that challenged my imagination to expand itself just a little more every day. The interest was never just the ships and cool tech; it was the people and how they interacted with their universess. I looked at science fiction as a means of making sense of this very alien-seeming Earth. When you think about it, humans do some very weird things here. Vulcans, Klingons, and Dune Fremen got nothing on us.

How did The Brothers Jetstream come about?

A long time ago, in the library of Wayne State University in Detroit, a group of white students were talking. I have no idea about what, but it had the feel of Dungeons & Dragons. When I--a tallish black guy--approached their table they stopped as though a switch had been flipped. Not a lull, a complete and total stop. I immediately thought "secret enclave" and became the character Milo Jetstream, on a mission to destroy secret enclaves everywhere. It was a funny, goofy name befitting a ridiculous, goofy situation, and this funny, goofy name stuck with me through the years, decades really, even getting Milo a brother: Ramses Jetstream. Now, if you have two black brothers named Milo and Ramses Jetstream, there is absolutely no way they are not going to be adventurers against the status quo, and raconteurs of mystery.

What's one of your favorite chapters?

There’s a chapter called “Not As Easy As It Seems” with the heroes and two supporting characters squaring off against a down-on-his-luck Djinn, which really shows how necessary good supporting characters are because the two ladies (Neon and Yvonne) direct the flow of the entire encounter by their actions and non-reactions. They’re two normal ladies suddenly plopped into a magical, unreal situation which they don’t have the luxury of time of developing coping mechanisms for. I love what that says about human resilience, which is kind of central to the theme of the book.

What are some of directions in SFF you still feel are unexplored? Where are we seeing significant innovations? What are some key stereotypes you think still need to be challenged?

If SFF continues to tell the same outward bound stories only with different epaulets on the white captain’s uniform (different jerkin on the albino wood elf), it will die off. There’s no way around that. Simple demographics won’t allow it. A black writer from Detroit is being interviewed on a diasporic Laotian blog. Stick that in your fifties parochial pipe and smoke it. We are going to see more inward-bound stories, stories that focus on the importance of inner change to affect current/future outer change.

It’s one thing to love Star Trek’s visions of equality, but unless we change ourselves we’re going to have the same goobers painting Confederate flags or other idiocy on the warp nacelles when no one’s looking that we have now. I think the immediate forecast will see more diversity of thought in our stories, a wider range of characters without the need to “justify” their presence in the work, and a much sharper focus on psychological effect rather than purely event-driven fiction.

The stereotype of anybody non-white being seen as the “other” is about to die a quick death. That’s the one trope that harms everybody involved, whites because it gives them acute tunnel-vision, non-whites because the only way we get to be viable is in some alternate reality or Planet of the Mino-rites. The Earth is and always has been diverse. I know diversity’s a word that gets belittled now but know what? It’s being belittled by stupid people so who gives a flying euphemism about belittling. Fiction, especially science fiction/fantasy, is not about being normative. Not about “We are the baseline by which EVERYTHING must be measured.” It is about “this is who we are” held beside “this is who we could be.” Now that could go many ways on the Utopia/Dystopia scale, but I prefer we reach for higher ground. 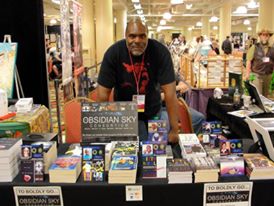 What was the most difficult thing about putting The Brothers Jetstream together?

Making it as exciting and fun as possible but keeping it grounded in real emotion. I didn’t want a series of plastic incidents meant to drive the story from inception to end. If someone died I wanted the hero to sit somewhere and cry. If there was a defeat I wanted the defeated to be angry. And if there was attraction I wanted there to be real attraction, not “I’ve known you three hours; I can’t live without you.”

Was your family supportive as you began to show interest in being a writer?

Gods, I wish. I took up writing when very young, 12 or 13. I was an avid reader, not just science fiction, everything. I was the kid who got excited when the teacher assigned Hamlet. One day my mother said that I did so much reading I might as well write a book. Up to then it hadn’t been on my radar that I could write a book. Books were just for consumption. So in a roundabout way she supported me. But on the whole, writing was a weird hobby that the weird middle child of the family took up. My mama reads my stuff now (which kind of mortifies me because there’s dirty bits in there). My father never viewed anything creative as worthwhile unless it made money. Well, Jetstreams is my fourth book out, Daddy. Still not making money! He passed away years ago. I like to hope he’s supportive of me in a spiritual way now. 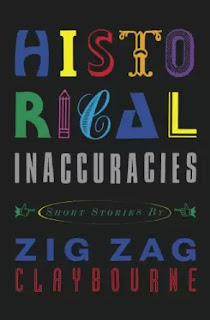 As a writer, when are you most satisfied with a piece?

Satisfaction for me comes when I can step back from a piece and feel something from it. There has to be emotion, communication, and intellect, because that’s all we have to work with on this ball. And not feel something for it, but from it. It’s easy to coo and kiss over your own stuff, but when you’ve printed the last page and there’s enough honest energy coming off the paper like you’ve created a talisman, I can take a hundred poor reviews and still give myself the nod of a job well done.

What's your starting advice for anyone thinking of getting into writing?

Number one: Ask yourself what is your gift to the reader? Why in the hell are you putting pen to paper?

Number two: If you’re thinking of presenting your beginning work as being “like” such and such’s, guess what? Agents, publishers, and readers already have such and such. Such and such is selling. If you’re not going to bring “you” then stay home. “You” needs to be well-read, open-minded, inquisitive, and inclusive, otherwise you’re a drab paper cutout on a very colorful, 3D, vibrant world. My advice is tell yourself “Welcome to the world of 3D printing.” 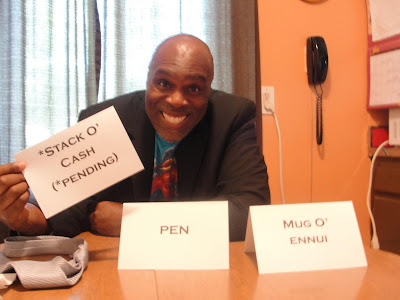 What's the best compliment you've received for your book so far?

One of the authors who blurbed The Brothers Jetstream: Leviathan said “If you read books to be transformed, you have to read him (me).” One award-winning writer you know said, “Read these words and be changed by them!” Wow. To me, a good piece of art, be it book, album, movie, or anything, has a little bit of genetic material needed for the recipient’s DNA to transform, evolve, or otherwise change. Doesn’t have to be monumental; can be as small as genuine laughter or as rich as evoking the feeling of first love. For me to get those words from writers I respect is a whopping big deal.

A book I started writing when my niece entered high school. I told her I’d have it finished in her honor by the time she graduated. She’s now a junior. I’ve got a year. This one will be for the 12-14 age group, a sci-fi romp through alternate Earths for all the girls in the world who’ve never gotten their shot at being the Destined One. You can probably tell by now I’m very big on everybody getting a turn on the marvelous rollercoaster of Imaginative Life!


You can check out The Brothers Jetstream: Leviathan at Amazon.