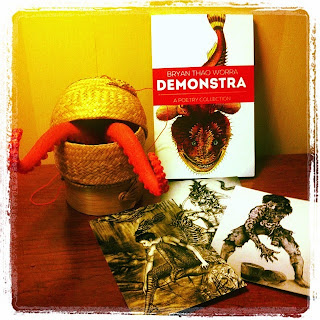 One of the key panels that I was able to present during the recent CONvergence convention in Minnesota was Legends of Laos. The presentation was described as: With over 160 different cultures in Laos, there are many different beliefs that can be difficult to untangle. We'll look at many entities from traditional mythology, including giant carnivorous warrior-sorceresses and lusty super-simian bio-weapons. Roy Booth helped provide many examples of cross-cultural traditions for comparison. 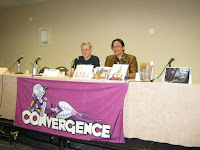 In part, the hope throughout the entirety of my time with my fellow conventioneers was to generate a healthy interest in the various entities attributed to Southeast Asia. I hoped to help them to understand the work that's been done to date, and areas where we still have significant gaps in our knowledge.

This year, we wound up covering a staggering number of entities in a very short period of time and I suspect it was easy to lose track of them all. So, to that end, I want to make sure there's at least one post at this blog that provides a rough recap of what we discussed, and what you might google for further research. 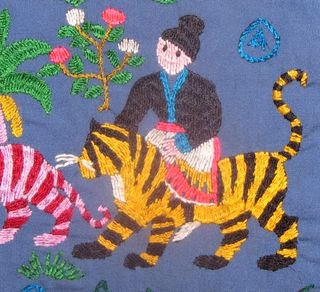 Weretigers were one of the first entities we discussed because it led into a significant number of issues we need to understand when dealing with many of the creatures of Southeast Asia and Laos in particular. While we're all agreed that weretigers are present in Laos, each of the various tribes and cultures there feel the weretigers have different powers and forms. The most common being anything from abandoned babies, bathing beauties, to pious monks or a piece of jewelry. The weretiger condition can be contagious, depending on who you talk to. Shapeshifting is possible in almost all cases. But almost all of the creatures of Southeast Asia shapeshift, so it's entirely possible you never know who you're really dealing with. To complicate matters, there is a forest hermit tradition variously spelled as Leusi, Lersi, Reusi, and so on. These hermits often gain the ability to change shape into beings who have heads like tigers or other fierce creatures. The hermits are relatively friendly to everyday humans. The controversial text, Peoples of the Golden Triangle by Paul and Elaine Lewis is, despite the character flaws of the authors, in many ways a good place to start with a surprising number of footnotes taking beliefs about weretigers and the like into account. I have not yet had the chance to review Patrick Newman's Tracking the Weretiger: Supernatural Man-eaters of India, China, and Southeast Asia, because it did not seem to have much material specifically regarding Laos. However, there may be cross-cultural information worth considering. 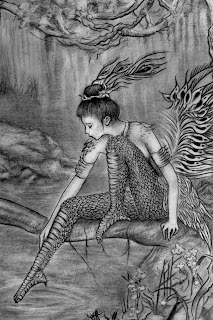 Kinnaly were another major subject. These are the half-human, half-birds of Hindu and Buddhist legend, and a key point in this year's conversation was taking note that many entities from these legends change form along the way. In India, the Kinnaly were said to have equine features. We felt it was interesting to note that similar to dragons and large reptilian entities of legend, in Asia, creatures tend to be intelligent, wise, and powerful. But once they get into Europe, they tend to devolve into brutish, savage, and hostile creatures. The carnivorous bird women of Greece, harpies and sirens, for example, would seem almost unrecognizable as relatives to the Kinnaly of Laos, who are considered the embodiment of beauty, grace, music, dance, and the arts. This year's discussion included a recap of the Lao epic, Manola and Sithong, regarding a young Kinnaly princess who was captured by a human hunter and sold to a prince who fell in love with her, despite various court intrigues.

Phi is the general catch-all term for various types of spirits who can be found throughout Laos. We discussed the Phi Phaed (or the Lao term for Preta, hungry spirits, in Buddhist tradition). We discussed a variety of grandmother ghosts including the hungry Phi Kongkoi and Phi Ya Wom, who broke into a million carnivorous pieces who continue to plague humanity today.

We also discussed the Phi Kasu, similar to the Pennangalan of Filipino tradition, an entity that's actually reported throughout Asia. We discussed how some villages put thorns around their windows to prevent the Phi Kasu from coming in, especially since they tend to hunger for the blood and flesh of pregnant women by many accounts. In China, there was once reportedly an entire village of them, and at least one was the consort of a Chinese general, although it freaked the troops out, and they set about dispatching her to the other realms.

We had a conversation regarding the Buddhist hells of Nalok or Naraka, and how during August, the gates of hell are opened for a night for the ghosts to visit their relatives during the Boun Khao Padab Din festival. Many in the Latin American cultures could see parallels to Dia de Los Muertos. 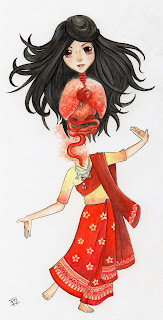 Nyak and their women, known as Nyakinee can be roughly described as gruesome, giant, carnivorous warrior-sorcerer perverts who indulge in all sorts of unsavory practices that humans are forbidden to engage in. Their roots can be found in the classical Rakshasa tradition, and they were the primary antagonists in the Lao version of the Ramayana, known as Phra Lak Phra Lam. It should be noted that many of them took vows to protect the teachings of the Buddha, however, and that they will mete out terrible punishments to those who distort the truths of Buddhist teaching. You can find images of Nyak in many Lao temples around the world. 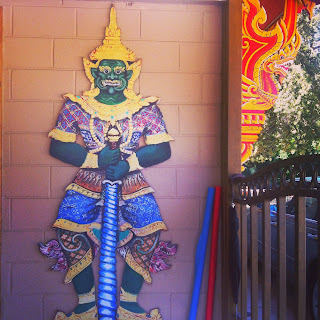 The primary guardians of the Lao temples, as well as sacred waters and caverns of Laos, and some believe, of all Lao people, are the Nak (not to be confused with their animalistic cousins the Ngeuak) also referred to as the Naga. Female Nak are referred to as Nakini or Nagini. Younger ones are considered Nakanya or Naga Kanya. There will be some variations of spelling. Some accounts identify well over 1,000 different types of Nak. Some have multiple heads, others have very specific powers or domains, etc. Connected to the rainbows, they are said to bridge the mortal realms with the celestial realms. But they will also fiercely defend sacred streams, so while they are somewhat friendly towards humanity, they are also typically best left undisturbed. 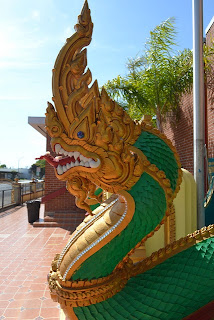 The Vanon come from the Hindu tradition of the Vanara, and are the "friendly" warrior monkeys such as Hanuman, the White Monkey general. Lao legends note Hanuman's great courage and ferocity but also tend to remember his habit of trying to romance the mermaids and Nak princesses. The significant thing I have tried to get across is that the Vanon were created by the various deities and demigods of legend to fight against entities such as the Nyak. They weren't all strictly monkeys. Some had features of bears or badgers, tigers, or other wild beasts and imbued with various mystic and superhuman powers such as high strength, speed, and senses. While Lao legend typically presents them as cute, I would strongly argue that you need to consider them laughing bio-weapons. 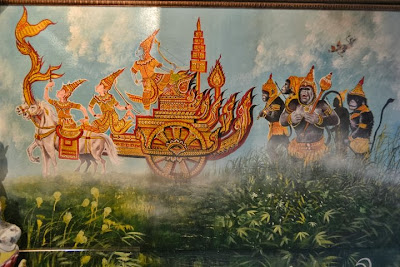 There were numerous tangents we went on throughout the conversation, as in any good panel. One or two principles that came up was a question of what do we consider paranormal. In Southeast Asia having to confront such moments actually often feels quite normal. The research of S. Suwanlert has some fascinating questions about the realities of entities such as the Phi Pob and how you deal with them, for example. In Southeast Asia, it differs from the US and Europe in that dispelling or exorcising the ghosts and the supernatural isn't really the priority, typically, as much as finding a way to live in harmony with them, especially ancestral or guardian spirits, or to determine to avoid them.

As you can see, this is a LOT of material we were covering and there were many more things we could discuss, but I hope this helps those of you who were in attendance, or who wanted to come but couldn't, to get a better sense of some of the things to research or look for in the future. But what are some of your questions?