Tea, Bones, and Roots. A conversation with poet Sandra Lindow 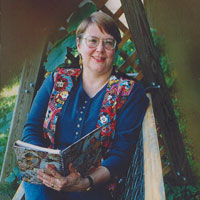 Sandra Lindow is one of those poets of the world who reminds me why I enjoy poetry, and particular;y poets in the speculative tradition. I've known her for well over a decade since meeting her and her husband, the writer Michael Levy at science fiction conventions in Minnesota.

The author of eight books of poetry and many acclaimed publications around the world, she's a frequent nominee for the Rhysling Awards.  She's been living for years in Menominee, Wisconsin and her awards include the Jade Ring for first prize in poetry from the Wisconsin Regional Writers' Association, and the Wisconsin Press Women's Award for Poetry in 2003, and the WFOP 2003 Triad Theme Contest.

I had the pleasure of being interviewed by her during the 2015 CONvergence convention where I was a Guest of Honor, and she was of tremendous assistance in presenting the 2015 Rhysling Awards with me for the Science Fiction Poetry Association. You can visit her online at: http://www.wfop.org/poets/lindowsa.html

Can you tell us a little about yourself, and how did you develop an interest in poetry? What’s it like writing poetry in Wisconsin?

I have loved poetry since I was a small child. I was lucky to have parents and grandparents who read to me. Soon I had memorized Robert Lewis Stevenson’s Child’s Garden of Verses and most of the early Dr. Seuss Books. My family was active in a rural farming community church, and I loved the music. I began singing in church choirs before I could read. I think I have hymns in the marrow of my bones, the rhythms and rhymes are so deep.

Growing up in the fifties and sixties, I was also fascinated with the space race. In fifth grade I wrote a poem that began, “Many years have come and passed from Pilgrim ships to rocket blast …” and went on to laud American patriotism. My mother’s genealogy went back to Elder Brewster who came over on the May Flower, and my father’s parents were first generation German Americans. The rhythms of dialectical differences fascinated me. (My first book of poetry, Rooted in the Earth, is partially written in my German grandparents’ voices and explores the history of our century farm as well as the rapidly disappearing rural culture.) My first published poem appeared in a Sunday School magazine when I was eleven. I knew early on that I wanted to teach English, so when I was ten, I created a school room in our upstairs where I tried to make other children sit in rows and work in workbooks and was offended when they didn’t think it was fun. During high school, I wrote a collection of poetry about country living, the beauty as well as the long school bus rides. At graduation I was named outstanding English student for my class. I majored in English at University of Wisconsin-Eau Claire and published in its student newspaper and literary magazine as well as a counter cultural mimeographed magazine written in protest of the Viet Nam War.

Although in the sixties, I may have been the only wannabe poet in the unincorporated village of Chili, Wisconsin, Wisconsin has always had a dynamic tradition of poetry. The Wisconsin Fellowship of Poets, now in its 65th year, is the second oldest state poetry organization in the nation. (August Derleth was a charter member.) I joined in the 80s after winning the Meudt Award for Narrative Poetry. I have served as West Central Regional Vice President since 1988. The Fellowship provides a Museletter with markets, sponsors various contests, supports poetry activities in the state as well as the Poet Laureate and publishes a Wisconsin Poets’ Calendar every year. As can be seen in the Calendar, there is much about Wisconsin weather and landscape that makes for poetic inspiration.


Do you prefer coffee or tea? And how do you like it?

I prefer tea and have many different kinds of tea in my house so that I can fit it to my need at the time, caffeinated, decaffeinated, herbal etc. I usually drink it unsweetened or with a little honey. I have concluded that artificial sweeteners and sugar aren’t good for me, and, in any case, foregoing sweetener makes it possible to savor the delicate flavors of the tea. I actually have poems that mention tea drinking. One is called “Tea with Peter’s Mother” and is about the problems of mothering a Peter Pan.


When you introduce someone to your poetry for the first time, which poem do you like to start off with, lately?

This is a difficult question. Certain poems seem to sum up various periods of my life. When I was in my forties, it was a poem called “A Celebration of Bones” and described falling in love with a life-sized x-ray of my own bones that was taped to a chiropractor’s wall. Now in my sixties, my poem “The Hedge Witch’s Upgrade” comes to mind. A hedge witch is a woman who lives at the physical and psychological edge of a village and spiritually connects between civilized and natural worlds. The poem is about gardening and getting a little gardening help from a passing frog.


When are you most satisfied with a poem you’ve written?

I am most satisfied with a poem that is tightly written but still maintains the rhythms of beautiful language. I want my poems to have powerful images and an emotional center that can be conveyed to the reader. Usually my inspiration for writing is something that touches me emotionally. My desire is to explain it without over explaining, to leave meanings open so that they continue to “work” on my readers. I was pleased with this year’s Dwarf Star selection for that reason:


Who’s been an enduring influence on your poetry over the years?

I went through Robert Frost, T. S. Elliott, and Ezra Pound periods but I have been most influenced by women who wrote about their daily lives such as Emily Dickinson, Wisconsin poet Lorine Niedecker, Sylvia Plath, Adrienne Rich, and Mary Oliver. I have been powerfully moved by women poets like Olga Broumas who use the tropes of the fairy tale to describe what it feels like to grow up in a world that undervalues women. Here is an excerpt from Broumas’s “Cinderella.”

Apart from my sisters, estranged
from my mother, I am a woman alone
in a house of men
who secretly
call themselves princes, alone
with me usually, under cover of dark. I am the one allowed in
to the royal chambers, whose small foot conveniently
fills the slipper of glass. The woman writer, the lady
umpire, the madam chairman, anyone's wife.
I know what I know.

Other speculative poets that have influenced me include Jane Yolen, Terry Garey, Laurel Winter and Ruth Berman. Part of the pleasure here has included knowing them and reading with them. I wish I could write like Ann Schwader. She writes these perfect little sonnets.


What’s a skill you picked up which was unexpectedly useful in writing your poetry?

I write a lot of poems about gardening, but unexpected skills might be yoga meditation, doing Sudoku and playing Solitaire. Poetry requires mental concentration, the ability to tune out distractions and focus on a mental task, to be “inside” an activity for an extended period of time.


If you could do a poetry reading anywhere in the world, where would you like to perform?

I would like to read a poem on Garrison Keiller’s Prairie Home Companion Radio Show. It would also be wonderful to do a reading outside in summer in a band shell as part of a local Chautauqua event. Farther from home, I am not sure how well my work would translate to other cultures, but I could see myself giving a reading on a boat in the Lake Country of England or on Arthur’s Seat in Edinburgh, Scotland.

Hmm, I could see potential in Babe the Blue Ox or Coyote, particularly in their female incarnations.


What's your starting advice for anyone thinking of getting into writing poetry seriously?

Don’t quit your day job, dearie. Serious poetry is hard work, but it doesn’t pay for groceries. Read lots of poetry. Join a writers’ group that meets monthly and focuses on rigorous critique and emotional support and encouragement rather than chit chat. If there is nothing available locally, start your own group and coordinate readings at libraries and coffee houses. My experience is that everyone who starts writing seriously can find places to publish.


What's next for you?

Right now I am running for vice president of the SFPA. If elected I plan to revise the constitution and get nonprofit status. I have poems that I would like to publish as books, a series called Arboreal about child raising, and Cinderella’s Breast, a collection of speculative poems about breast cancer. I have started experimenting with writing modern sonnets—fourteen lines of ten syllables. They don’t require the strict rhyme scheme of traditional sonnets.

Someday I’d like to edit an anthology of poems about famous people meeting in heaven. These require a little research and are fun to write. Mine include, “Ronald Reagan and John Lennon Meet in Heaven” “Emily Dickinson and Melville Dewey Wed in Heaven” and “Annette Funicello and the Iron Lady Meet on the Way to Heaven.” It would also be cool to edit an anthology of speculative poems that are redactions of famous main stream poems. Ruth Berman’s take on Marianne Moore’s “Poetry” won second prize in the 2014 Rhysling Contest. I have one “When I Am an Old Physicist I will Wear Ultraviolet” that was published in an anthology of women’s poetry. I bet other poets would have fun with this too.