DIVERSICON 23: SPACE IS THE PLACE 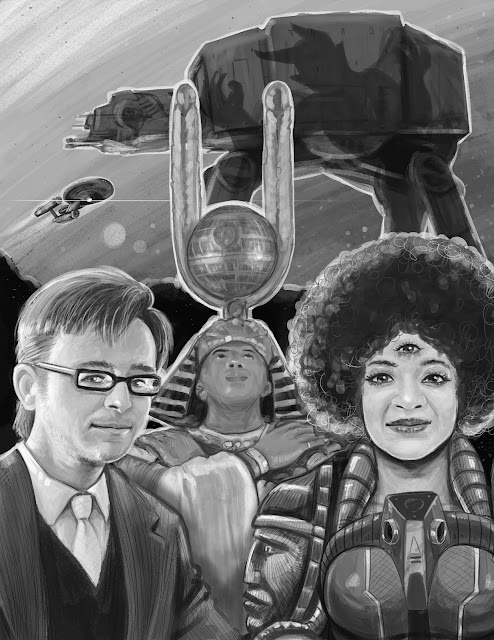 This week is Diversicon 23, with the theme of SPACE IS THE PLACE, and Lao American artist Nor Sanavongsay returns to provide this year's science fiction convention art, featuring the Guest of Honor, Ytasha L. Womack, and Special Guest, Rob Callahan. This year's Posthumous Guests are legendary musician Sun Ra, Leigh Bracket, and Gene L. Coon.

Ytasha L. Womack is a filmmaker, author, journalist, and choreographer. She is the author of Afrofuturism: The World of Black Sci-Fi and Fantasy Culture (2013), and author/creator of the popfuturist novel 2212: Book of Rayla, first in a series. Her other books include Post Black: How a New Generation is Redefining African American Identity (Lawrence Hill Books). She also co-edited the anthology Beats, Rhymes, and Life: What we Love and Hate About Hip Hop (Harlem Moon/Random House). Her film projects include The Engagement (director) and Love Shorts (producer/writer). She is a Chicago native.

Rob Callahan is a professional purveyor of made-up stories about the way we really are. His works of fiction include the novel Hellbound Snowballs and the short story collection, A Wish Upon a Fallen Sky. He has written and performed two award-winning spoken shows, Idiosychronicity and The Last Ditch (co-written with Allegra Lingo), and he regularly joins the Minneapolis entertainment troupe The Rockstar Storytellers on stage. His nonfiction has been featured in Secrets of the City, salon.com, l’etoil Magazine, and cracked.com. He lives in the Twin Cities. (And I personally consider him awesome.)