The time has come again for the annual kickstarter for the 2015 H.P. Lovecraft Film Festival in Portland Oregon, October 2-4th. The theme this year is "A Trip to R'lyeh" and already the organizers are planning some outstanding incentives for fans of H.P. Lovecraft and the films inspired by his work. This year's rewards and theme center around "a secret return trip to the island by the Miskatonic University's Explorers Club."  The Kickstarter exclusives include the Expedition Log Book, the map of the island (with landmarks named after several of the explorers...), a box of sculpted artifacts, and official MU Explorers Club lapel pins and shirts, or shirts and pins from one of the cultists of Cthulhu. Overall it's very ambitious and exciting project to consider and they organizers are working very hard to make it an incredible event. 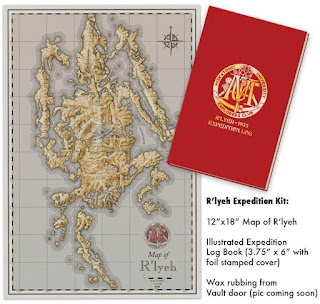 I happened to like the SHADOWS OUT OF TIME level, for those who can't attend in person.  At this level, you can be with the festival in spirit through a message in the Daily Lurker (up to 35 words), You get your choice of design for the limited edition lapel pin and supporter t-shirt, the Expedition Kit, Challenge From Beyond 2015 book, Official Festival Poster, a copy of the Daily Lurker (the 1930s faux newspaper), and the digital download pack.

I strongly recommend backing at a level that gets you the "Expedition Kit," which comes with all sorts of goodies. For example, you'll get a survey map of R'lyeh: "Fairchild-2Ws are equipped for aerial photography. After they made several passes, we were able to compile the images. This 12x18 reproduction of the survey map is the final result of what we believe to be the best, most accurate map of the island."

You'll also get a wax rubbing of the Vault Door "a section of the vault jamb was found lying several yards away from the vault door." In the expedition log book, you'll get an account of the expedition, with "numerous illustrations, notes, equipment manifests, and diary entries."  You'll have a chance to "Piece together the full story of the club's discovery of the meaning of the Silver Key, the hidden and horrible secrets of the land mass itself, and live the journey to this accursed island in a first person account." 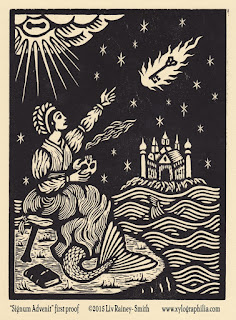 Other levels include small sculptures, wood prints, and more. But all in all, if H.P. Lovecraft entertains you, this is a project I'd definitely check out.