Tentacles and Teeth: An Interview with Richard Luong of Cthulhu Wars

Over at Asian American Press I recently did an interview with Richard Luong, the artist who provided the visionary art for Sandy Petersen's successful epic board game, Cthulhu Wars. I deeply admire the work Richard has done over the years in carving out his own particular voice, approaching the varied entities of the Cthulhu Mythos with a fresh take.

Often, I dislike a great deal of art inspired by the Cthulhu Mythos because it has been too terrestrial and thus antithetical to the cosmic visions that terrified H.P. Lovecraft in the early 20th century. When I look at a number of the images connected to certain companies taking on the Cthulhu Mythos, we have none of the cosmic awe and dark majesty the mythos implied. The results are perfunctory, or look as if designed for gamers to assess it and then figure out how to deal enough damage to these entities to at least drive it off, if not outright kill it.

Luong's work has consistently managed to capture a tremendous sense of the Cosmic Weird in the very best sense of the word. While many of the entities have recognizable callbacks to the earlier work artists have done with Sandy Petersen's Call of Cthulhu roleplaying game, they have a renewed menace easily on par with the best of Tom Sullivan's work. 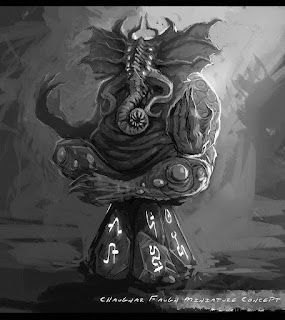 Naturally, I was particularly drawn to his take on the elephantine Great Old One, Chaugnar Faughn, and his original take on the Dimensional Shambler, although I was somewhat in the minority on that one. This isn't to suggest I don't have some quibbles about a few of his takes, but by and large, when I see his pieces, I know that a great deal of thought has gone into them, and that if he persists with this level of energy, he will be very highly regarded in the decades ahead. 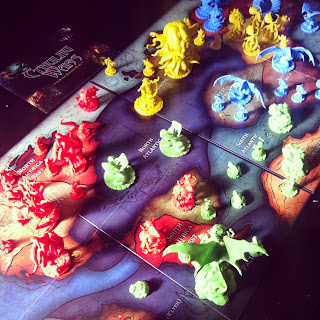 I was delighted to have the privilege of commissioning Richard last year to do some concept art for the Nakanya, or the Nak princess of Lao myth and legend as seen through the potential lens of the Cthulhu Mythos, and he absolutely did not disappoint. Once everyone's schedules free up, I certainly hope to commission additional work from him in the future. 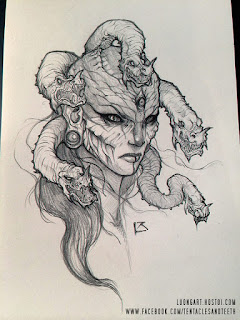 In the meantime, he's in the final stages of his kickstarter for his first deluxe artbook featuring the art connected to the Cthulhu Wars projects and the Cthulhu Mythos in general. It's an exceptional deal, including a chance to pick up a miniature of the Hound from Tindalos and a new version of Cthulhu, which I greatly prefer for its epic scale and menace. His original sketch of Cthulhu and the connected miniature for Cthulhu Wars is on point, but this alternate one is truly a don't miss. 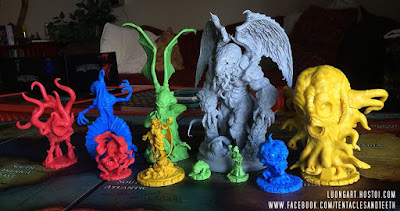