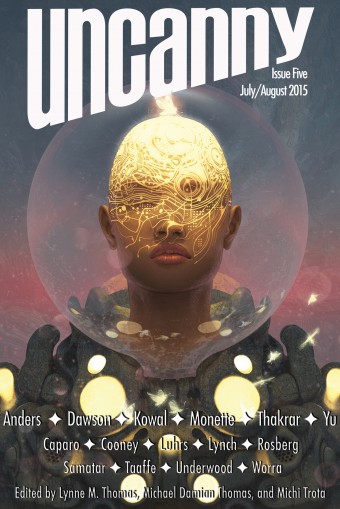 I'm delighted to report that my poem "Slices of Failiure in Super Science" debuted today at Uncanny Magazine, along with the work of great writers such as Shveta Thakrar, C.S.E. Cooney, Sofia Samatar, and E. Lily Yu.

Be sure to check the entire issue out!

The featured fiction of this issue includes "Woman at Exhibition" by E. Lily Yu, and Mary Robinette Kowal's "Midnight Hour." I'm quickly becoming a big fan of Shveta Thakrar's work, and "The Rainbow Flame" is a great example of her style.

Sofia Samatar presents a nice quick snapshot on the subject of "writing queerly" in SFF literature looking at three approaches and what we might consider about these techniques. She cites the work of An Owomoyela, Samuel Delaney and Ellen Kushner in this issue, and her points are well worth considering.

It's been great to see Lynne M. Thomas and Michael Damien Thomas keep this wonderful magazine going. Their selections have been thought-provoking and intriguing, and I look forward to seeing more from them in the future. I'm glad they're creating a space where diverse voices can really find an audience and we can see some impressive ideas emerge to inspire and excite everyone.

As a poem, "Slices of Failure in Super Science" came up in the aftermath of discussions regarding the classic horror films of the mid-20th century that were so often on the airwaves when I was growing up as a child in Michigan. There were often discussions of films such as "They Saved Hitler's Brain," "The Man With Two Heads," "Blackenstein" and "The Brain That Wouldn't Die" which gave us the classic imagery of "Jan in the Pan." In the 1980s, I often found myself watching films like "Re-Animator" and "From Beyond," "The Lawnmower Man" or "Flatliners" which had themes of the search for immortality and the defeat of death at their heart.

In this poem, I wanted to take a look at the different forms of failure that take place along this quest. I sought to probe our interest in preserving our consciousness, and how the West really tries anything it can to avert a final reckoning. 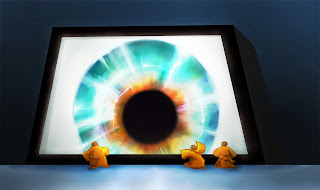 A frequent point I'd been making throughout CONvergence this year and other conversations is that of course, these ideas are largely centered in a very Western conception of the cosmos, and I don't think we've really seen a full exploration of these ideas in Lao and Southeast Asian literature.

This should actually provide many of our writers a lot to work with. What might happen in such stories. When our world-view is largely informed by a sense of reincarnation and multiple lifetimes, for example, how does this adjust the way we try to upload your consciousness. Might uploading or preserving our consciousness have a karmic weight or repercussion? In the Therevada approach, would it be a violation of the five precepts or another element of the Buddhist perspective to seek or to assist efforts in immortality?

If you're successful, does your consciousness continue to accumulate karmic merit and stains? Or do you get a reset? And if you do, then, are you really the same person? If not, then what's the point? Or is it possible, that you also have a new set of karmic laws and constraints applied to you? A Buddhist iteration of the Laws of Robotics. What does the precept against immoral sex mean to a cyber-consciousness? Could that be broadly interpreted as unethical distribution and reproduction of your organizing algorithms or something, or merely abuse of teledildonics?

But of course, "Slices of Failure in Super Science" is a poem, and in this case I didn't want to probe the question exhaustively, but to open the matter up to some further inquiry. Share and Enjoy! ;)